Thomas Ravenel and his girlfriend Ashley Jacobs have been the center of controversy and drama on this season of Southern Charm. The couple has made some enemies of some of their friends and have caused a firestorm with fans on social media. Several times on the show, the couple has voiced that they may be headed for a break up, but it looks like they are still together.

Fellow cast members have accused Jacobs of being a liar and a gold-digger on the show, but Ravenel has chosen to stick with the relationship. Recently, a source told Celebrity Insider that Jacobs’ mother and sister allegedly have called her a manipulative liar and want nothing to do with her. The source also said that Ravenel has been scared to “put his foot down” with Jacobs, for fear that she may spread lies about him as well. With all the rumors and negativity, maybe a break up is looming.

But, even if Ravenel and Jacobs do break up, there’s a good chance that Jacobs could stick around Charleston. According to Jacobs, she now has her nursing license in the state and she told The Daily Dish that she has really made Charleston her home, not relying on Ravenel as much. She explained, “Once I started working, I got a job, traveling, driving, I started to see it with a different perspective, not just going out to dinners and driving with my boyfriend. I’m like, ‘I’ve got to get around town.’ I’m like, ‘Wow, this is my home.’ I have to give myself a pat on the back because I never thought I would get to this place where even if things didn’t work out in my relationship in the future, I could still see myself out there.”

This may upset some of the Southern Charm cast members who have expressed their disdain for Jacobs. And, Kathryn Dennis isn’t the only “charmer” who yearns for Jacobs and Ravenel split up. According to Reality Blurb, an unexpected person who really wants the couple to break up is Bravo bigwig Andy Cohen. Backstage at the Southern Charm reunion, he told Reality Blurb that, “I’m rooting for Kathryn [Dennis] a lot this season. And I was rooting for Thomas to break up with Ashley … I’ve been stunned, really by Ashley.”

Despite all the hate surrounding the couple’s relationship, they continue to carry on with their courtship.

So, how did Ravenel and Jacobs meet in the first place. According to her press representative Patricia Maristch, the two met when Jacobs was living in California and Ravenel ended up being in the area. In an article with Romper, Maristch recalled, “Ashley had only seen a few episodes of the show, which she discovered because one of her patients was watching the show and one of her best friends is a big fan … When Ashley was at the bar and saw him she knew she had to get a picture with him to send to her friend, and she also felt bad because he was by himself. She invited him over to her table with her friends, and the rest is history.” 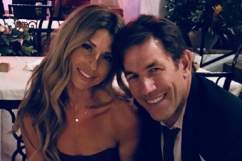 Read More
Reality TV, Southern Charm, TV
There have been rumors that Thomas Ravenel And Ashley Jacobs have split, but the two appear to still be together. Some co-stars want them to break up.