Alaskan Bush People has started airing its new season 8 episodes and Noah Brown is the last to join the family at their new, Washington homestead. But, in addition to filming a new season, Brown was celebrating his new marriage. He and wife, Rhain Alisha, got married in an intimate ceremony in Idaho, on August 15 2018, as reported by People. The date was special to the couple because it was the two-year anniversary of the couple meeting when Rhain was traveling through Alaska.

In a joint statement, the couple announced the news of their nuptials, saying, “We are so excited to start our new life together as husband and wife and we look forward to building new memories as our own family. God bless everyone for all of the love and support.”

Brown’s father, Billy, served as his best man and the nuptials were catered by Famous Willie’s BBQ and Stacy’s Cakes. In Touch Weekly reported that the bride’s dress was from David’s Bridal. Newsweek reported that just 25 people were at the wedding.

Brown proposed at sunset, after a hike in Juneau, Alaska, on April 17, 2017. He even designed the engagement ring himself.

Congrats to the newly weds! ?????? by @KassyMichellePhotography

According to In Touch Weekly, Rhain was very supportive of Brown as his mother battled severe lung cancer. Brown revealed that, “Rhain has been so patient and supporting [me] through everything that has been happening, my mother’s cancer, having to leave Alaska, my car keeps breaking down, and all in all I have been thinking of how thankful I am that she moved in with [me] instead of going back to Oregon.” Brown’s mother, Ami, said she was so happy for the newlyweds and their wedding. Ami Brown gushed, “We are so happy for them. We wish them years of happiness.”

Hollywood Life reported that in July 2018, Brown called Rhain the girl of his dreams on social media. He also stated, “My first priority will now always be my new family and my loyalty is to my soon to be wife and my future children. It is my job to take care of my new family and it will be an honor to do my best for them.”

“I tried on a tux for the first time ever. That was weird.” – Gabe Brown ? by @KassyMichellePhotography

Prior to the wedding, Brown and his then-fiancee hosted a meet and greet in celebration of their nuptials. According to Radar Online, a few fans showed up. Brown created the event on Facebook, writing, “Greetings, Rhain and I are hosting a celebration of our soon-to-be wedding in Coeur d’Alene, Idaho. This is an informal gathering of anybody wishing to come and be a part of our wedding story. We have seen a lot of people wishing that they could be included in our wedding and now is your chance because we want to give you all the opportunity to be there with us.”

Brown also wrote that, “Rhain and I cannot wait to see y’all guys Opens a New Window. and celebrate our wedding with everyone, but please keep in mind that the rest of my family will NOT be at the meet and greet, it is just Rhain and I trying to celebrate our soon to be wedding with our FANily.” 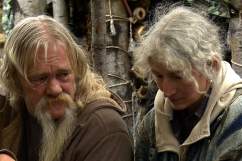