Tami Roman and boyfriend Reggie Youngblood have certainly had their ups and downs over the years. The two have been together since 2013 and have appeared on a couple reality shows together. They appeared on Marriage Boot Camp together and had a lot of issues to work through. They also film Basketball Wives together and, on episode 13 of season 7 for BBW, the two definitely have a hiccup. The Xfinity synopsis of this episode states that, “Tami drops the bomb on Reggie that she wants to call off their engagement and fears he will end their relationship; tension between Kristen and CeCe continues to build; Shaunie wants to boost her marijuana education with a trip.”

So, is the couple still together? All signs are pointing to “yes”, especially since Madame Noire has reported that the two are filming their own reality show together. Roman has reportedly been filming a new spin-off series called Beverly Trill Billies this summer. According to The Jasmine Brand, the show will focus on Youngblood’s “entertaining family that lives down south”, as well as Roman’s family.

In addition to filming another reality show together, the two also got matching tattoos in recent months. The couple got each other’s names on their ring fingers to show their commitment to each other, according to VH1 … but the tattoos were not permanent. They did, however, spark rumors that Roman and Youngblood had eloped, according to Dallas Black. Roman was sure to clear up the rumors, maintaining that the tattoos were not real. She said, “No, it was henna (Hennessy). We still haven’t gone there […] We’re thinking about it. We’re actually going to take the step.”

Roman continued, saying, “I’m 48 and I don’t want to spend the rest of my life by myself. And this man genuinely loves me. And this is something that he wants and never experienced. So I’d be selfish to not travel down that road with someone who I really love and who loves me.”

Dallas Black also reported that back in March 2018, there were rumors of a split with Roman and Youngblood. Being in the public eye, the couple has definitely dealt with their share of drama. When it came to these reports, this time it was Youngblood who set the record straight. Youngblood explained, “Hate to let y’all down, but Tami and I are riding together until the wheels fall off. Folks hate to see people happy and prospering, but it won’t work! Keeping spreading your lies, you look miserable out here.”

The one issue that the couple has had, that keeps popping up, is children. With Roman nearing age 50, having kids is definitely a challenge and it’s an issue the two dealt with on Marriage Boot Camp, as well as Basketball Wives. For a while, Roman didn’t want to have more children, but she changed her mind and tried to make it work for her man, who wanted to be a father. The couple was fortunate enough to get pregnant, but publicly revealed that they suffered a miscarriage. Roman has voiced that she worries Youngblood will one day resent her if they do not have children. Today, however, the couple appear to be content in their relationship. 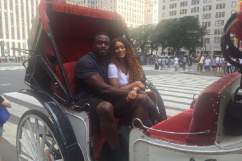 Read More
Reality TV, TV
Are Tami Roman and her boyfriend Reggie Youngblood still together? What is the latest news on the couple?