It has been over a week since Demi Lovato was found unconscious in her home following an apparent drug overdose. The singer remains in the hospital and is said to be focused on her health at this time. According to Us Weekly, Lovato has agreed to “go straight to rehab” after she is released from the hospital, perhaps sometime this weekend.

Now, new details about that fateful night — and the following morning when Lovato was found — have been reported by TMZ. The outlet, which was first to report that the Sorry, Not Sorry singer had overdosed, reported that it was Demi Lovato’s bodyguard that may have saved her life.

Lovato was found unconscious in her bed and her assistant thought that the singer had died. According to TMZ, Lovato’s assistant was yelling, “she’s dead, she’s dead,” when Lovato’s bodyguard arrived at the home. He quickly jumped into action.

“We’re told the bodyguard rushed to Demi’s side and it appeared she was not breathing. Our sources say there was blood on her pillow, an ominous sign, because it’s evidence of hemorrhaging. It appears there was also vomit and her airways may have been clogged. Our sources say the bodyguard administered some sort of first aid to keep Demi alive before paramedics arrived. Based on what we’re told it appears the bodyguard propped Demi up and tried clearing her airway which allowed her to breathe,” TMZ reported.

The site added that paramedics administered Narcan, an overdose reversal drug that is used to reverse opioid overdoses, upon arriving at Lovato’s home.

Demi Lovato has not released a statement of any kind, nor has she posted anything on social media since her apparent overdose. A rep for the singer released the following statement shortly after reports that she had been rushed to the hospital surfaced:

“Demi is awake and with her family who want to express thanks to everyone for the love, prayers and support. Some of the information being reported is incorrect and they respectfully ask for privacy.”

Lovato’s upcoming tour dates have not been cancelled at this time, according to her website. It’s unknown how long she will be in rehab or if/when she will be back on the road, but her next scheduled concert is on September 20 in Mexico City. She has eight shows scheduled in South America through the end of November. 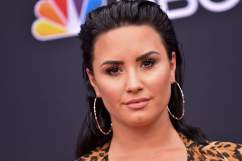