Tekash 6ix9ine was arrested on Monday and currently faces federal charges including racketeering and affiliation with the gang Nine Trey Bloods. TMZ reports that the rapper has been placed in general population at Brooklyn’s Metropolitan Detention Center. He currently faces a maximum sentence of life in prison.

6ix9ine’s current legal situation has led many to wonder whether he’s dating anyone. According to HotNewHipHop, he’s currently dating a bartender and aspiring rapper known simply as Jade.

Jade is best known for suing Cardi B after the rapper reportedly threatened her and ordered an attack on her. According to Complex, the charges stem from an altercation at the Angels Strip Club back in August. Cardi reportedly accused Jade of sleeping with her husband Offset, and sent members of her team to jump Jade and her sister Baddie GI, who is also a bartender.

Jade claimed that five members of Cardi’s team “viciously attacked her, grabbing her hair, punching her, and hitting her with an ashtray” while she was working. The sisters also claimed that a second attack took place on August 29, when Cardi’s team attacked them by “throwing bottles and chairs at them causing serious injuries that required medical attention.” The case has not yet been settled.

Shortly after the incident, 6ix9ine hired both Jade and Baddie GI to appear in the music video for. Many saw this as a showcase of loyalty to Nicki Minaj, who also appeared in the video and has maintained a rivalry with Cardi B throughout the year. 6ix9ine and Jade began dating soon after. They recently appeared on an Instagram Live feed together, where they kissed and made jokes into the camera.

6ix9ine recently spoke about Jade and her burgeoning rap career during a live stream chat on Instagram. During the conversation with fellow artist Tory Lanez, 6ix9ine claimed that she has what it takes to match, if not exceed, the popularity of Cardi B. Watch a clip of the chat below.

#tekashi69 says he can write his new girlfriend #jade some music and put his platform behind her and she will be bigger than #cardib . FAXXXXX or FICTION????

Lanez disagreed with this, saying: “Jade, no disrespect to you, but you’re not gonna go like Cardi B. People love Cardi B’s personality. She’s somebody that came from the dirt and rise up, and you can’t take that away from her.” 6ix9ine responded by saying that Jade could blow up with his assistance. “I’ll write her some sh*t,” he explained. “I’ll be like,’Yo, Jade. You know what? You gon’ rap today.'”

6ix9ine was previously in a relationship with a woman named Sara, who is the mother of his child Saraiyah  Hernandez. It is unclear when the split up, as Sara prefers to keep the details of her life private from 6ix9ine’s fans. “I don’t address no situations head on and give clear answers and I keep y’all [sic] twisted,” she said on Instagram Live.”Because that’s my personal life.”

Learn more about 6ix9ine and how much he’s worth below. 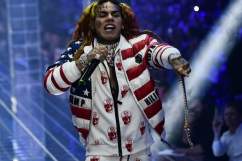 Tekashi 6ix9ine Net Worth: 5 Fast Facts You Need to Know