Instagram/Thesummerbunni The Summer Bunni pictured on her Instagram page.

Now, it appears, Cardi’s fanbase has gone after Summer Bunni. According to The Blast, Bunni was locked out of her Instagram account on Tuesday night and claims that Cardi’s rabid fans, also known as the Bardi Gang, was responsible for it. Sources close to Bunni, who is an aspiring rapper, say that she believes Cardi’s fans hacked her Instagram account as revenge for causing Cardi’s split from Offset, before promptly deleting it. Bunni’s account no longer exists on the platform.

Before Bunni’s account was deleted, she had 35 posts and a sizable 76K followers. The Blast reports that Instagram has yet to confirm who is behind the hack, but that Bunni’s account was shut down shortly after she posted an IG live session where she defended her relationship with Offset. After the session was over, Bunni realized that she was locked out and was unable to log back in before it was deleted.

“You should be sending people to fight your husband,” she said during the IG live session. “I’m not the only girl, I’m the only girl the world wants to f*ckin’ focus on. Again, I’m sorry I made a mistake.” This is not the first time that Bunni has spoken about her affair with Offset. Shortly after her involvement was made public, she released an apology video to TMZ.

“To Cardi B and her fans and her family and to her situation, these was never my intentions,” she said. “I never wanted to break up a happy home, to be the cause of someone just saying ‘f*ck it.’ I have not spoken to Cardi B, but I would like her to know that I’m a very genuine person, and I’m not here to break up her family or mess up what she has going on with her husband.”

“I’m sorry I didn’t think about my worth as a young lady,” she added while crying. “I just hope she can overcome this… I know her and Offset actually do have love for each other.” Watch the full video above. 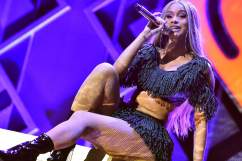 WATCH: Cardi B Flips the Bird While Rapping About Offset