Skins, the third studio album by rapper XXXTentacion, and the first since his untimely death, has been leaked. According to HipHopDX, the album began making the rounds on the internet late Tuesday night, mere days ahead of its official release date on Friday, December 7. Skins boasts ten tracks and a lone guest feature from rap superstar Kanye West.

The track “One Minute” has already gained lots of attention from listeners as West defends the abuse allegations that XXX faced prior to his death. “So much hate at the top, it’s a lonely place / When you find out the opps ain’t the only snakes,” he raps. “And your spouse only know what you don’t eras e/ The world only know you by your worst mistakes / So spaz on they ass, that’s the only way / Smash on the gas down, Stoney, ayy / Crash and come back with a swollen face / And when I’m on my way, X hold the gate.”

It’s unknown who leaked the album, or whether the leak was intentional, but Skins is currently available to bootleg and download on various rap blogs. It is also the second studio release to be leaked in as many weeks. Tekashi 6ix9ine’s debut album Dummy Boy was originally set to be released on November 27, but was leaked a few days early when a link to purchase was made available on his website. The link was later taken down.

Skins was officially announced as the next XXXTentacion release when an iTunes Store link became active on November 7. The link was taken down shortly after, but the page revealed that the album had 10 tracks and would be a total of 17 minutes long.

The album was preceded by the lead single “Bad!” which was released two days later peaked at number 16 on the Billboard Hot 100. Check it out below.

The capsule will launch via Kanye’s Yeezy brand, and premiere at the official Skins listening party, which will be held at the RC Cola Plant in Miami. According to HotNewHipHop, the designs will be handled by Emmy award-winning designer JJ Villard. We will provide more information on the launch as well as the Skins listening party as they are made available. 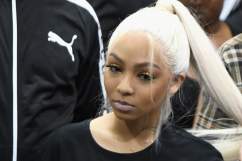 Cuban Doll: Rapper Who Allegedly Hooked Up With Offset