Getty R. Kelly's sex tape trial took six years to conclude, and the R&B star was found not guilty on all 14 charges of child pornography.

The series focuses heavily on Kelly’s scandals, abuse accusations and child pornography charges over the years, and many of the women featured in the documentary highlight the abuse they claim to have endured at the hands of the R&B singer.

Kelly has faced numerous other allegations of being involved with underage girls throughout his long career, the biggest involving a sex tape scandal. In 2002, a sex tape emerged showing Kelly engaging in sexual intercourse and urinating on an underage girl. Shortly after the tape leaked, police raided his home in Davenport, Florida and found 12 images on a digital camera depicting Kelly “involved in sexual conduct with the female minor.”

Stephanie “Sparkle” Edwards, an a former backup singer for Kelly and the aunt of the unnamed underage girl in the sex tape, introduced Kelly to the alleged victim, a meeting that still “haunts” her, according to an emotional clip from the documentary. “I should never have introduced her to him,” she says in the clip, adding of the sex tape, “I’d hear things but to see it visually, and she was so young, it f–ked me up.”

Sparkle had introduced her niece to Kelly when she was 12-years-old, and the alleged sex tape was recorded two years later, when her niece was 14. She said she began to fear that the relationship was getting out of control once she found out her niece was going to his home and studio alone. Once the tape surfaced in 2002, Sparkle didn’t hesitate to go to the police and name both Kelly and her niece in the video.

To this day, the young girl in the tape has not been identified publicly, although the girl’s best friend from childhood, Simha Jamison, did testify against Kelly during his trial, who recognized her friend in the tapes and identified Kelly as the man in the video.

According to a 2008 article by CBS News, Jamison was put on the stand to testify. She said she and the alleged victim were best friends for about 10 years, until their junior year in high school, and that she recognizes her friend as the one in the tape. When prosecutors asked Jamison if she recognized the man in the tape, she pointed to Kelly.

She told the jury that she and the victim visited Kelly several times at his recording studio and a basketball court when they were just 12-years-old. According to CBS, the victim first introduced Jamison to Kelly as her “godfather,” and claimed Kelly used to give her friend cash gifts of “no less than $100 and no more than $500.”

She said the two also visited the home where authorities say the sex tape was filmed between Jan. 1, 1998, and Nov. 1, 2000. Jamison said her friend never mentioned a sexual relationship with the star, although Jamison still identified her as the young girl on the tape. 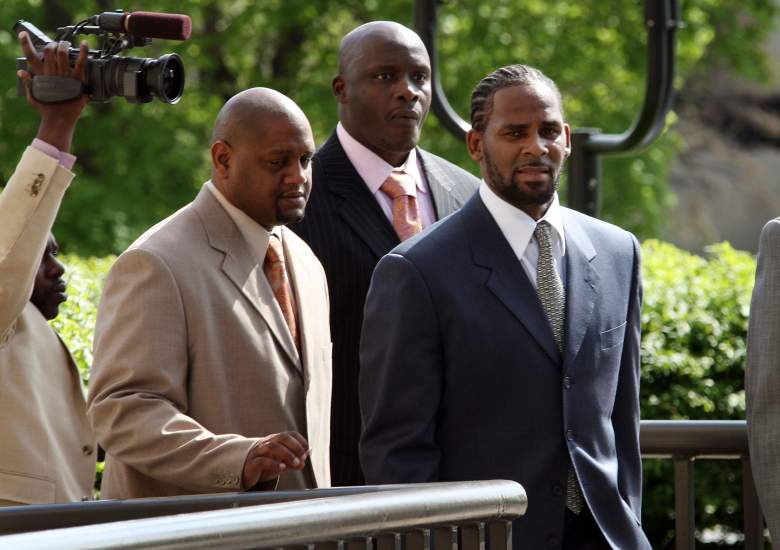 GettyR. Kelly arrives at the Cook County courthouse in 2008

During the trial, the 27-minute long sex tape was played for the jurors. The homemade video shows a man, believed to be Kelly, having sex with a young female, who is naked for most of the recording except for a necklace with a cross dangling from it, according to The Hollywood Reporter. At the very beginning of the video, the man hands the young girl money, and she mouths the words “thank you.” She then dances to songs from the Backstreet Boys and Spice Girls, before the two begin to have sex, with the girl calling the man “daddy,” a name that Kelly has reportedly been having all of his girlfriends call him for decades. Although the man in the video walks up to adjust the camera several times, his face is often obscured.

Kelly was facing 15 years if convicted on the child pornography charges. Kelly’s defense attorney Sam Adam Jr. argued that the man in the video was not his client, and that somebody could have easily tampered with the tape to superimpose his head on another man’s body. He accused Jamison of colluding with somebody in the girl’s family, claiming a family member wanted to extort money from Kelly, and also claims that the girl in the video must have been a “professional prostitute” because the man pays her immediately when the video starts.

Kelly was eventually found “not guilty” on all charges. As the verdicts were being read on the final day of the trial, the singer started crying and whispering “Thank you Jesus, thank you Jesus, thank you Jesus,” over and over again, according to his lawyers.  Due to the fact that the victim in the video never pressed charges, identified herself, or testified in court, the case was left with a significant handicap.

Although Kelly was found not guilty of all charges in his child pornography trial, he has been accused by several young women of continuing to have sex with minors long after the charges were dropped. You can read more about his alleged victims here.