The second episode of Game of Thrones season 8 finally aired this Easter evening, and although it’s only been a week since the season premiere, it definitely feels like this week has dragged on for ages while we all waited impatiently for the second episode.

Luckily for all you Gendry and Arya Stark shippers out there, on tonight’s episode of GoT, fans were given an extra treat for the long and grueling seven day wait (and the nearly two-year wait before the premiere). Before we break down the scenes involving the two, this is your MAJOR SPOILER WARNING! Turn back now if you don’t want anything spoiled for you, or proceed at your own risk!

For those of you who’ve stuck with the show as long as you have, you know that Gendry (Joe Dempsie) and Arya (Maise Williams) were close friends in the earlier seasons. Before their short-but-sweet reunion during the season 8 premiere, they hadn’t seen each other since season 3 episode 5, when the Brothers Without Banners sold Gendry to the Red Priestess, Melisandre. The two had become close throughout their travels from Kings Landing, when they were initially on their way to the Wall (before they were captured by the Lannister army).

When the Brothers Without Banners sold Gendry to Melisandre, the two separated and were never really sure if the other was still alive. Granted, Arya was still basically a child when she had last seen Gendry, and she was devastated when he decided to stay on with the Brotherhood, telling him tearfully “I can be your family.” Gendry sweetly replied, “you wouldn’t be my family, you would be my lady,” which spawned a tidal wave of Gendry-Arya shippers for the rest of eternity.

So now that the two are finally reunited once again and cozy at Winterfell, what’s going to happen? Will they just remain friends, or “family,” like Arya said she would be to him, or will a romance blossom between the two, now that Arya is grown?

arya's little smile when she sees gendry riding into winterfell… aww my heart is so soft for them pic.twitter.com/ptAb7KBRdx

After last week’s playful, light flirting (when Arya asked Gendry to make her a weapon out of dragon glass), fans are desperately clinging to the hope that the two will end up together. There were some sparks flying between them when they were talking, and Arya’s little smile when she first saw Gendry ride into Winterfell, as well as Gendry’s similar, flirty smile when she responded to his teasing has fans impatiently waiting for them to take their relationship to the next level.

On tonight’s episode, fans get a fun and slightly sexy interaction between Arya and Gendry, where Arya shows him just how far she’s come since they last met. Gendry notices Arya watching him while he’s making weapons, and asks her if she has anything better to do than linger. She confronts him about where her weapon is he says he hasn’t made it yet because he is still working on others.

Watching Gendry and Arya and all I can think about is….. #GameofThrones pic.twitter.com/j5LX78ljf9

At one point, Gendry mentions that staying in the Crypts of Winterfell would be safer when the Army of the Dead come, and she asks him if he’ll be down in the crypts as well, and if he’s fought them before. He tells her he has, and she tells him to explain to her what the dead were like – how they move, how hard they are to kill, what they smell like, what it was like to face them.

All Gendry can say is “really bad,” so she pushes him for more information. “You want to know what they’re like? Death, that’s what they are like.”

And Arya responds in the most Arya-like way possible – by picking up several dragon glass knives and throwing them, one by one, into a post across the courtyard, all while Gendry watches in astonishment.

“I know death,” she tells him. “He’s got many faces. I look forward to seeing this one.”

Gendry immediately agrees to make her weapon, and she walks away, with him staring after her in amazement. So, although this may not be the romantic encounter fans were hoping for, there was definitely heat between them, so keep your fingers crossed for more! 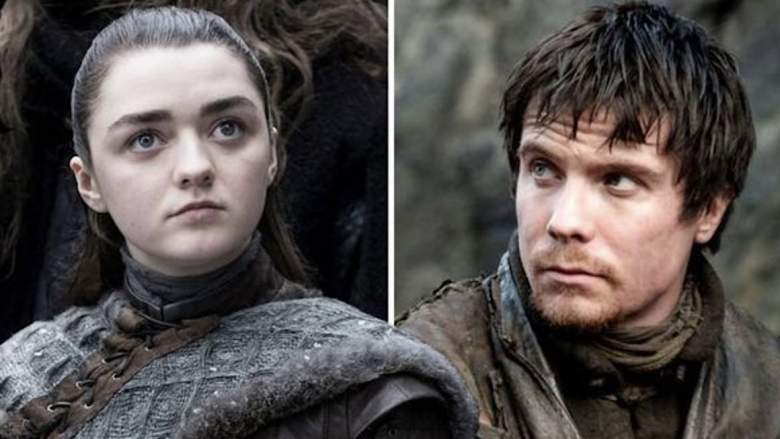 HBOArya and Gendry – Game of Thrones

This article will be updated if there are anymore interactions between the two during episode 2. And there definitely was more action … a lot more action.

A bit later in the episode, Gendry delivers Arya’s weapon to her, and he tells her about why Melisandre bought him from the Brotherhood, and how she stripped him down naked and put leeches all over his body to take his blood. Arya cuts him off and starts to drill him on whether or not he’d ever been with a woman before. He looks visibly nervous and explains that he’s been with three women in the past.

Arya casually walks up to him and says, “we’re probably going to die soon. I’d like to know what it’s like before that happens,” and finally kisses Gendry! What follows is a super steamy strip down, with Arya taking control (which shouldn’t surprise anybody). She starts to take her shirt off, stops, looks at Gendry and says “I’m not the Red Woman. Take your own bloody pants off,” before the two continue kissing passionately.

So all you Arya-Gendry shippers got far more than a treat for Easter, and can finally rest easy knowing the two were together at least once before the end.

Tune in Sundays at 9/8c to catch the eighth and final season of Game of Thrones, only on HBO.

READ NEXT: GOT House Sigils: A Review of the Sigils on Game of Thrones

Read More
Game Of Thrones
Game of Thrones, season 8 episode 2 aired tonight, and all of you Gendry and Arya shippers were given a bit of a treat for waiting an entire week for the second episode.