Saturday Night Live returns tonight on NBC. The show will air at 11:30 p.m. EST, or 8:30 p.m. PST depending on your time zone. It will be hosted by former cast member Adam Sandler, and pop singer Shawn Mendes will be featured as the musical act.

Sandler is an SNL alumni who spent five seasons on the show between 1990-95. Some of his most memorable characters include the Cajun Man and the Opera Man, and his comedy track “The Chanukah Song” remains a fan favorite to this day. On a recent ranking of the Best SNL Cast Members, Sandler placed at 27. “He helped define his five years on the show as much as any cast member has defined any SNL era,” the article stated.

Despite his association with SNL and his successful film career, Sandler has never hosted before. When asked why he hasn’t, Sandler said it was because he didn’t feel like he’d be very good. “Why should I? I don’t know how good it would be. I’m slow now,” he told Vulture in 2014. “There are guys who love doing it who are great at doing it. I just don’t know how good I’d be doing it and I did what I could do on that show.”

It’s been 24 years since Sandler last appeared on SNL, which breaks the record for the most time between being a cast member and a host. The previous record holder was Dan Akyroyd. The promo for tonight’s episode pokes fun at Sandler’s hiatus. “24 years, that’s like one Shawn Mendes ago,” the actor says, before Mendes corrects him and reveals that he’s only 20.

*gets extremely excited for Saturday’s show with @adamsandler and @shawnmendes*

Sandler recently stopped by Late Night with Seth Meyers to discuss his hosting debut, and he admits that he should have done it much sooner. “First of all, I should have come back to the show before it was HD. Good lord I waited a long time, I don’t really look like Adam Sandler anymore,” he said. “I love Lorne [Michaels] and I wanted to see him and do it with him and be on the show and bring back some guys, but I gotta tell you, it’s knocked me out. I’m so knocked out right now.”

Mendes will be making his second SNL appearance. The singer told Rolling Stone that he was excited to return to the set. “I think I’m in a skit, I have no idea what it is but I just got a wig fitted,” he said. “[Acting] is the biggest you-have-to-own it thing. As I’m starting to realize I can own this singing thing I think I’ll fall into acting and stuff more, 100%.”

Mendes went on to tell Sirius XM that he hopes to snag a photo with Sandler. “I feel good, I feel really good,” he said. “I feel more nervous just about the song release in general than playing SNL, ’cause I feel pretty excited about that. I met Adam Sandler a few times, and he’s been really, really, really nice to me, so it should be fun.”

“I got starstruck by him. I didn’t get a photo with him. I still haven’t got a photo,” he added. “We’re going to be on TV together so I’m just going to screenshot the television.” 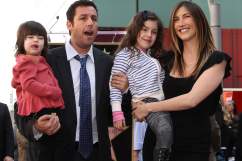