Debby Ryan has not yet commented on the death of her former Jessie co-star Cameron Boyce. The actress has been silent on social media since news broke that the 20-year-old actor died following a seizure. However, on Sunday evening, Ryan changed her Instagram profile photo and some fans believe that she did so in honor of Boyce.

Boyce died on Saturday, July 6. He had an “ongoing medical condition” which has since been identified as epilepsy.

Ryan did not comment on anything nor did she make any kind of announcement about the photo. She simply made the change several hours after news of Boyce’s death was first reported.

In addition to changing her profile photo, Ryan shut the comment function off on her four most recent posts, likely because she was getting inundated with comments about Boyce.

Up until about an hour ago, Debby Ryan’s profile photo on Instagram was a snapshot of herself. However, she changed her profile picture, as you can see in the screenshot above, to a very light background that appears to show some clouds in the sky.

While social media users aren’t 100 percent certain what Ryan’s profile picture is of or what the meaning behind it might be, it seems obvious that she chose the photo in honor of Boyce.

The picture looks blurry but clouds on the horizon can be made out. In many ways, the photo looks heavenly.

Interestingly, Ryan did not change her photo on her verified Facebook account (which she hasn’t used since January). Ryan likewise did not change her photo on Twitter either. Ryan has been active on Twitter and keeps her 4+ million followers in the loop, posting frequently on the micro-blogging platform. She most recently retweeted a few things about the California earthquake on July 6.

“Grateful for another year of photos and videos of fireworks to never look at,” she tweeted on the July 4 holiday. 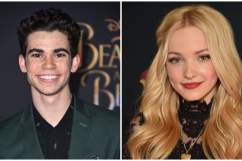 Only a few Fans Noticed Her Profile Photo Changed

Fans have been busy commenting on Ryan’s Instagram photos all day. While many have been begging her to release a statement about Boyce, some took a moment to point out that they noticed she had changed her profile photo.

“Anyone noticed her insta pic changed?” one Instagram user wrote.

“Did you change your profile pic to the sky with that glow for cam? Because if so that’s so sweet,” commented another.

As for why Ryan hasn’t commented publicly on Boyce’s death, fans assume that she’s mourning privately, as this is an overwhelming loss. Fans are looking forward to reading a statement from Ryan if/when she feels ready to post one.