Early this season on Below Deck Mediterranean 2019, Chef Mila Kolomeitseva was fired after sending out below standard meals to charter guests. Third Stew Anastasia Surmava stepped in to help Kolomeitseva and later was promoted to yacht chef, after Kolomeitseva’s dismissal. Surmava expressed anxiety over accepting the gig and did not respond well to criticism when guests started having issues with her food. She also told co-star Joao Franco that she wishes someone else was in the kitchen dealing with the stress that she was handling. Chief Stew Hannah Ferrier started expressing to the cameras that she felt Surmava’s meals were not at the level they needed to be for a superyacht.

Travis Michalzik started upsetting his cast-mates with his drinking. Michalzik continued to get drunk and, while trying to pursue Ferrier, passed out at a fine dining restaurant, which upset Ferrier, as well as the other crew members. Colin Macy-O’Toole was one of the cast members who was most embarrassed by Michalzik’s behavior. Other clips from the show this season show Michalzik offending Surmava and Franco stepping in. Michalzik is also shown drunkenly collapsing in one of the cabins on the boat.

Jack Stirrup has been walking a thin line on the boat this season, and even a couple of his cast members said on Watch What Happens Live that he is the cast member most likely to do just enough work to not get fired. Stirrup has admitted to slacking off on the show and Franco, who is his superior, has butted heads with Stirrup over this. Captain Sandy Yawn has also expressed her upset to Stirrup during several instances this season. In one confrontation between Stirrup and Franco, Franco tells him they need to talk about him getting fired.

When Surmava was promoted to Chef this season, June Foster came aboard as the new Third Stew. But, on her first outing with guests, she forgot some vital items the utensils needed for their lunch. Foster also had issues with answering her superiors on her radio. Captain Yawn even addressed this, telling Foster that if she didn’t answer Ferrier’s calls on her radio, she would feel her wrath.

Colin Macy-O’Toole has expressed this season that he doesn’t quite fit in with some of his cast-mates. And, in one clip from the show, Macy-O’Toole is shown going up to the bridge to speak with Captain Yawn and Ferrier appears concerned. Macy-O’Toole could be quitting or he could be telling Yawn his opinion about a fellow cast member. In another clip, Macy-O’Toole is shown badly hurting his arm, which could affect his ability to work as a deckhand.

Who Gets Fired on ‘Below Deck Mediterranean’ 2019?

On episode 12 of the season, Surmava tells Captain Yawn that she feels like she has bitten off more than she could chew and that she has never felt so much anxiety. Yawn tells Surmava that she appreciates her and will reach out to another chef for help. In the meantime, Surmava will carry on. This makes us think Foster will be sent home if Surmava resumes her Third Stew role.

At dinner, Macy-O’Toole says that he’s getting sick of cleaning stuff all day and he’s homesick. He said that he’d rather have a job back at home. Macy-O’Toole said he also gets embarrassed by some of his cast-mates’ drunken behavior. Could he end up quitting?

During the same dinner, Michalzik, who is drunk, jokingly slaps Surmava and it divides the cast. Some feel that Michalzik crossed a major line, while others felt it was just a joke that was taken too far. The next day, Michalzik apologized to Surmava for his actions.

Captain Yawn is successful in finding another chef and wants to put Surmava back into her Third Stew role, which means that there is no place for Foster on the boat. She calls Foster up to the bridge and explains to her the situation, but Foster doesn’t react well and says, “That’s not nice,” even though Yawn said she’d give her a great reference. Yawn also said “It’s not personal. You’re an amazing human being.” Foster leaves the bridge upset.

But, she may not be leaving for good. Macy-O’Toole makes the decision to quit instead of Foster and goes to visit the Captain. But, we don’t think this is Macy-O’Toole’s last day on the boat because of upcoming show clips.

In a promo clip of the rest of the season, fan-favorite and Below Deck Med veteran Chef Ben Robinson’s voice is heard saying, “Hello, lovelies.” So, either he returns to step in and cook or, he is a guest on the boat. But, we’re thinking he will head up the galley once again. Either way, fans will be very happy with his comeback on the show. 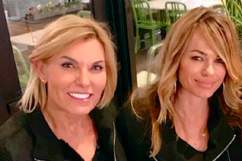 Read More
Below Deck, Reality TV, TV
At least one person leaves Below Deck Mediterranean this season ... other than Chef Mila. A video clip shows someone getting fired and we think someone quits.