Season 9 of American Horror Story premieres on September 18, 2019, with a whole new batch of creepy and frightening episodes. Get the rundown on when the show airs, episode descriptions, the plot description of the new season, cast info and more.

Evan Peters and Kathy Bates will not appear on the show this season. In an interview with GQ, Peters talked about taking a break from AHS, explaining that taking on sinister or emotional roles takes a toll on his mental health, especially with shows like AHS and Pose. He revealed, “It’s been all a massive stretch for me and really difficult to do. It’s hurting my soul and Evan as a person. There’s this massive amount of rage that’s been called upon from me, and the emotional stuff that’s been called on me for Pose has been heartbreaking, and I’m sick. I don’t feel good.” Peters’ ex Emma Roberts has chosen to return to the series. Olympic skier Gus Kenworthy will play the boyfriend Emma Roberts’ character this season. 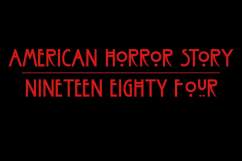 AHS 1984 PLOT: The Xfinity synopsis of the new season reads, “In the summer of 1984, five friends escape Los Angeles to work as counselors at Camp Redwood. As they adjust to their new jobs, they quickly learn that the only thing scarier than campfire tales is the past coming to haunt them.”

“AMERICAN HORROR STORY” SEASON 9 EPISODE 1: The premiere episode is titled “Camp Redwood” and the description of what to expect reads, “A group of young friends set out for a summer of fun when they hit the road to Camp Redwood to work as counselors.”

“AMERICAN HORROR STORY” SEASON 9 EPISODE 2: Episode 2 is called “Mr. Jingles” and the plot synopsis of the episode states, “Darkness descends upon the camp; although it’s lights out, evil has no curfew.” This episode will air on September 25, 2019.

“AMERICAN HORROR STORY” SEASON 9 EPISODE 3: “Slashdance” is the title of episode 3. It will air on October 2, 2019 and the description of the episode is, “Imitation is the best form of tragedy; coming clean can be pretty messy.”

“AMERICAN HORROR STORY” SEASON 9 EPISODE 4: The fourth episode is called “True Killers” and it is scheduled to air on October 9, 2019. The description of this episode reads, “Mr. Jingles closes in on the one who got away as the counselors rally to escape Camp Redwood.”