The wait is almost over. After months of anticipation and last-minute delays, Kanye West is releasing his new album Jesus Is King on Friday, October 25. Because West has been tweaking the album for so long, there’s tons of songs that have been teased online or previewed during the rapper’s listening parties.

Since the album’s alleged release date is around the corner, we’ve decided to collect all the snippets and leaks that have been put out so far. Check them out below:

‘UP FROM THE ASHES’

“Up From the Ashes” is the album’s opening track. It sees West singing in a vocal style similar to that of 808 & Heartbreaks and some of the more melodic moments on The Life of Pablo. The lyrics focus on being born again, akin to a Phoenix rising out of ashes. “Up from the ashes into the sky / Found a redeemer, how I survive,” West sings.

“Voice of their mothers, Mary and Christ / Your light has healed me, blessed with new life,” he continues. “I could tell you, He could show you / God and Heaven shinin’ on you.” The track is produced by West and does not have any guest features.

“Use This Gospel” is one of the most anticipated tracks on the album. This is largely due to the artists who are featured. Clipse, the rap duo made up of Pusha T and No Malice, have not made a track together in some time, and saxophone legend Kenny G is among West’s most unique and unexpected collaborators.

“Use This Gospel” was originally previewed at the listening sessions held in Chicago and New York. The snippet that has leaked online includes the tail end of No Malice’s verse as it rolls into Kenny G’s saxophone solo.

West debuted “Water” during a live performance on Easter Sunday. The mellow track features vocals from Ant Clemons and Ty Dolla $ign. Clemons will contribute background vocals to most of the album, and he appeared on the 2018 West track “All Mine.”

“Water” focuses on themes of the aforementioned themes of rebirth and religion. Both the refrain and the chorus refer to the “purity” of water as a baptismal force, with lyrics like “We want water / Purest water / Like a newborn daughter,” and “The storm may come / But we’ll get through it because of your love / Either way, we crash like water / Your love, your love’s water.”

“New Body” is one of the most hotly contested tracks on Jesus Is King. The track originally leaked with features from Nicki Minaj and Ty Dolla $ign, but has since been reworked to have no curse words and a more positive overall message.

Minaj recently talked about the track and its different iterations. “What’s funny is that I did a song with Kanye, that he now wants to transform into a gospel song,” she explained. “I done wrote three different verses chile, and I don’t know. We ain’t seeing eye to eye on it. I don’t know, but of course, I love and respect Kanye, and Kim, we’ll see what happens with that.”

West first teased “Selah” on Instagram in October 2018. The track is produced by West and Ronny J, and adheres closely to the album’s themes of religion and rebirth. Fans got a higher quality snippet of the track when the trailer dropped for the Jesus Is King documentary.

“Selah” features church choirs chanting the phrase “Hallelujah,” which is nothing new to the Chicago emcee and his music. West featured the Harlem Children’s Choir on his 2004 track “Two Words,” as well as the classic singles “Jesus Walks” and “Ultralight Beam.” Check out the  full “Selah” snippet above. 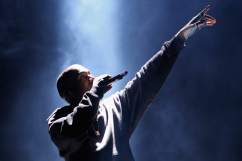 All Features & Guest Spots on Kanye West’s ‘Jesus Is King’