Total Divas is back for its ninth season on the E! Network. The reality series will focus on the lives of female WWE stars as they contend with family strife, personal drama and professional triumphs. There are several new cast members, which means that fans will get to see entirely new dramas play out. Read on to learn more about them, as well as spoilers for the season premiere.

Ronda Rousey Is a New Addition to the Season 9 Cast

Ronda Rousey is the biggest name being added to Total Divas. The former MMA star and current WWE Champion will be showing a more intimate side of her persona. WWE reports that she will gush about her MMA husband Travis Browne during the season premiere, and that much of her screentime will take place at her ranch, Browsey Acres. Neidhart also told Hollywood Life that Rousey will get emotional at various points throughout the season.

She’s very emotional,” Neidhart told Hollywood Life. “I feel like every week we have some sort of emotional meltdown together. I like that, because people don’t see that, but on the show, she’s not afraid to cry. That’s the Ronda I love — being able to connect with her on a personal level.” As for Natalya Neidhart, she’s still mourning the death of her father Jim “The Anvil” Neidhart, and she will try to cope by throwing herself into work. Her overarching goal throughout the season will be to win the Women’s Royal Rumble Match and eventually become the RAW Women’s Champion.

Carmella is still reeling from her breakup with, and has decided to throw herself into career. Despite her best efforts, she’s forced to choose between her friendship with the other cast members and a possible new love interest. Naomi has a less dramatic arc to open the season, as her storyline largely consists of hanging out with close friends Carmella and Sonya, and and preparing for the Women’s Royal Rumble Match. She wants to be the last woman standing this time, and nobody will get in her way.

Elsewhere, cast newcomer Sonya DeVille will adjust to her new relationship with girlfriend Ariana. DeVille is the first openly gay woman in WWE history, and she told Hollywood Life that she wants to bring a similar degree of diversity to the show. “Being able to share this journey on the show and be side by side with my girlfriend, Ariana, is kind of crazy,” she admitted. “It’s surreal for me. Being openly gay was a dream of mine four years ago, but now, to be an advocate for it and be on a reality TV show with it is a whole other level. It’s a proud moment for me.”

DeVille said that she and her girlfriend go through several changes throughout the season. “It’s me becoming more comfortable in my sexuality and sharing my private life with the world,” she revealed. “It’s my growth in my relationship, as well. When we started filming, [Ariana and I] had only been dating our or five months.”

“So you’ll see me becoming more comfortable with who I am and finding my style,” DeVille added. “My girlfriend originally didn’t want to be on the show — she’s not about the cameras and the limelight and all that. So you see us go though that at the beginning of the season. We go through a really cool and interesting roller coaster of emotions throughout the season. I’m excited for people to see the good, the bad and the ugly!” 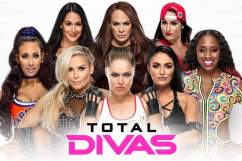