Season 2 of The Masked Singer continues tonight, and fans are curious which celebs are under which masks. Rottweiler is one of the most mysterious competitors on the show, given that his clues have done little to clarify her identity.

Fans are struggling to guess which celebrity is singing his way through the competition with the a gold chain and a faux six-pack, but we’ve collected all the clues and guesses below. Here’s what you need to know about Rottweiler:

1. Rottweiler Has Made Several References to Football & Pro Sports

Rottweiler has made several allusions to sports, and football, in particular. He’s made two references to football, implying he is or has been a football player, but it’s unclear if his sporting days were real or if he merely played an athlete on television. During his first clue package, he said, “The first time I touched a pigskin under the Friday night lights, I learned preparation is key.”

Rottweiler’s attire also supports his football fascination. He wears a gold chain and holds a “fantasy football” ring, and he told the judges that he “rose to fame overnight.” It’s also possible that the Rottweiler is a failed football player, and that he said preparation was key because he didn’t prepare as much as he should have. There is also the matter of the fantasy football ring, which narrows the focus down from pro players.

2. Judges Think That Rottweiler May Be a Former Boy Band Member

Rottweiler has inspired a slew of guesses as to his real identity, and many of them seem to revolve around the theory that he is a former boy band member. He wowed the judges with his bouncy rendition of “Maneater” by Hall and Oates, so much so that Nicole Sherzinger said it was one of the best performances they had ever seen. This supports the belief that the Rottweiler is actually a professional singer.

After Rottweiler’s performance, the judges honed in on a handful of candidates. Scherzinger threw out Bruno Mars as a possible guess, given Rottweiler’s charismatic stage presence and notable swagger. Robin Thicke guessed former Backstreet Boys member Brian Littrell, while Ken Jeong agreed, and threw out JC Chasez from N*SYNC as a possible alternative. Jenny McCarthy followed suit with her pick, as she mentioned Nick Lachey from 98 Degrees.

3. Rottweiler Makes Several References to Dogs During His Clue Package

Will Rottweiler be best in show? ? Don't miss a special two-hour episode of #TheMaskedSinger tomorrow at 8/7c on @FOXTV.

Fittingly, Rottweiler has made dogs a huge part of his clue package. Not only is he dressed like a canine, but he used the word “puppy love” during his narration, and identified with several characteristics that are chalked up to man’s best friend. “I’m a total perfectionist,” he said. “And I’m going to work my tail off to earn your puppy love.”

Rottweiler also said that he has a “wait and see attitude,” and is very loyal. The most telling detail, however, tied back to something that happened to him as a child. Apparently he was bitten by a Rottweiler, and the incident traumatized him. This is a fairly juicy clue, as it ties him to any celebrities who have shared a similar story.

4. Rottweiler Says Blue Roses Are Especially Significant to Him

12 hrs of work in…My man @mikedevries did an AMAZING job! From the many hours helping me design the piece to sitting for 12 hours with me grinding away! Which for the record, the REAL PAIN didn’t occur till the last couple hours. Still got about 6-8 hours left to do at a later date but really happy where it is right now! – Why did I do this you ask? Why did I cover up the cross piece? It’s as simple as this. I was never really happy with the original piece. I even had it touched up and modified years ago to “make it better” but still wasn’t happy with it. Been stewing over it for years on how best to go about covering it up. – The Rose… symbolizes LOVE… A reminder that LOVE should be the foundation of everything I do and say… Blue roses are often portrayed in literature and art as symbols of love, prosperity and even immortality… one could say Eternal Life. I also wanted to incorporate the “Cage to Rattle” Heart as well… you know… another symbol of LOVE… – #LOVE Spread that shit on EVERYTHING! #weallhaveacagetorattle

Rottweiler provided another specific detail about him when he said that “blue roses” are significant to him. This has many fans scouring the internet in search of celebrities who have mentioned blue roses, or have some tie to them.

Blue roses is where Chris Daughtry comes into play. The former American Idol contestant has a large tattoo of blue roses on his right arm, which you can check out in the Instagram post above. Daughtry even provided a lengthy explanation as to why the rose is such an important image to him.

“The Rose… symbolizes LOVE… A reminder that LOVE should be the foundation of everything I do and say,” he wrote. “Blue roses are often portrayed in literature and art as symbols of love, prosperity and even immortality… one could say Eternal Life. I also wanted to incorporate the “Cage to Rattle” Heart as well… you know… another symbol of LOVE.”

5. Fans Agree That Chris Daughtry Is the Most Likely Candidate

Finding some headspace on my walk this afternoon in Glasgow Scotland… #eyeofthetiger ? @maqvision

While the judges have yet to mention his name, the internet has made a point of solidifying Chris Daughtry as the most likely candidate. It’s easy to see why, given that Daughtry fits each clue down to the letter. He has a significant attachment to blue roses, he is a singer, and he rose to fame overnight as a contestant on American Idol, much in the way that Rottweiler’s clue package suggests.

Then there is the matter of Daughtry’s football past. Daughtry played football in high school, but he told ESPN that he was never that good. “I tried to be an athlete because I could run fast, but I wasn’t very good,” he admitted. “I won’t discourage anything my kids want to do. I want them to find their own way.” There are more subtle clues that match up, such as the Rottweiler’s penchant for standing in front of graffiti, which is something that Daughtry has done several times on his Instagram. 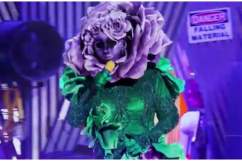 Read More
FOX, Reality TV, TV
Rottweiler is one of the many performers who have yet to reveal their identity on 'The Masked Singer.' Learn more about him here.