Keep reading for a rundown of Team Kelly 2020, along with short bios on each of the contestants, courtesy of the NBC website. Also, be sure to check back after Episode 6 airs for an update on Clarkson’s team.

Update: Chelle was eliminated after Clarkson chose to keep Anaya Cheyenne over the 18-year-old singer. Clarkson did not save or steal anybody else. 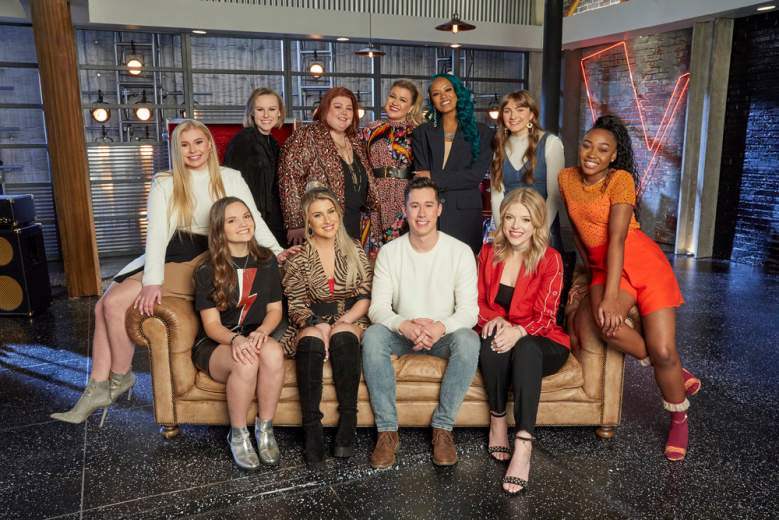 Tayler Green: Tayler, 27, grew up in a musical family where everyone performed and sang together. Her father is a pastor and a music producer, and Tayler spent a lot of time recording with him in their home studio. She began writing her own music in college and later moved to Los Angeles to pursue her career full-time. Although she found success in LA, she is still struggling to make ends meet while working odd jobs; she hopes her time on The Voice will give her the chance to focus on her music exclusively.

Megan Danielle: Megan, 17, was raised by a single mom, who supported Megan and her four siblings as a waitress. Megan turned to music at a young age to deal with stress, and her grandmother encouraged her to start singing. When she was 15, her mom signed her up to sing at a restaurant, and soon thereafter, Megan started singing at open mic nights and decided to pursue a professional singing career.

Chelle: Although Chelle, 18, always loved singing, she was too shy to perform publicly as a child, so she only sang around the house. After her grandfather praised her singing talent, she started uploading cover videos to YouTube; when she was 13, she was determined to overcome her stage freight, so she joined a group that taught kids how to perform with other musicians. She has since felt natural on a stage, and has been performing ever since.

Sarah Collins: Sarah, 18, loved country music since she was a kid, and started taking guitar and voice lessons when she was 8. By the time she was 10 years old, Sarah was asked to perform at multiple school events, and she later joined musical theater to help hone her stage presence. Sarah quickly began gaining attention as a “notable local musician,” and her band has even opened for artists such as Hunter Hayes and Kane Brown. She began homeschooling in high school in order to focus on her music career, and she currently has an ongoing gig at Blake Shelton’s Ole Red in Tennesee.

Samantha Howell: Samantha, 19, has been singing for most of her life, and she credits Miley Cyrus for inspiring her passion for music. She began booking her own gigs at 13 years old, and by the time she was 17, she was invited to California to start recording her first album. She has performed all over Virginia and recently moved to Nashville to pursue her music full-time.

Anaya Cheyenne: Anaya, 16, has always loved music and used to visit her godmother in Atlanta to attend her performing arts camp. When she was 12, she asked to live with her godmother so she could attend the program full-time. Anaya has lived in Atlanta for the last four years now, and she has continued to put her musical aspirations above everything else in her life. She has a YouTube channel with over 80,000 subscribers and she was even asked to perform the national anthem at Madison Square Garden.

Jules: Jules is 15 years old and has been singing for the last 10 years. She started guitar lessons at 8, and by the time she was 12, she was performing at local gigs all around town. Jules has been able to juggle school, homework and music for the last few years, and credits her parents for helping shape her into the hardworking young woman she is today. According to her bio, “Jules is now playing three-hour shows and is ready to show off her voice on television’s biggest stage.”

Mandi Thomas: Mandi is 33 and has been a classically trained singer since she was 11. She continued her musical studies in college and started giving voice lessons when she graduated. Mandi has struggled with self-confidence her entire life, so she inevitably put her music career on the backburner. However, after two of her former students found success on The Voice, Mandi decided to give the show a shot in order to focus on her personal music goals.

Micah Iverson: Micah, 25, was born and raised in Tokyo to missionary parents who taught English, according to his bio. Micah taught himself to play the guitar in order to set himself apart from his eight siblings, and once he moved to the U.S., he joined an acapella group and continued to work on his personal music. Although he went to school for business finance, his dreams of being a musician were stronger than his desire to work in business, so he quit his job and moved to Atlanta to start a band.

Gigi Hess: Gigi, 22, has loved singing since she was a child. When she was still in middle school, Gigi was diagnosed with polycystic ovarian syndrome, which caused her to gain weight at an alarming rate. She was bullied throughout her childhood, which caused her to shy away from singing publicly. When she was 19, she decided to take control of her future and had gastric sleeve surgery. She dropped 120 pounds, focused on improving her health, and once she gained back her confidence, she decided to pursue a career in music. Gigi is now a full-time musician.

The ‘Battle Rounds’ Begin on March 23

Can anyone tell us if a fiddle and a violin are the EXACT same instrument? ? #TheVoice

The description for Episode 6, titled “The Battles Premiere,” reads, “The ‘Battle Rounds’ begin, and the coaches enlist music industry powerhouses Jonas Brothers (Team Nick), Dua Lipa (Team Kelly), Ella Mai (Team Legend) and Bebe Rexha (Team Blake) to prepare their artists for a dueling duet. After the vocal face-off, each coach must choose which artist from their team is the strongest to move forward to the ‘Knockout Rounds.’ Each coach has one steal and in a new twist, one save, that will enter their saved artist into a Four-Way Knockout.”

New episodes of The Voice airs Monday nights at 8 p.m. ET on NBC. You can find more coverage on The Voice here.

Read More
Celebrities, Kelly Clarkson, The Voice, TV
Team Kelly consists of 10 artists vying to win "The Voice." Click here for a rundown on Kelly Clarkson's team ahead of the first "Battle Rounds" episode, which airs Monday at 8 p.m.