Katie and Derek, stars of the hit reality series Married at First Sight, have had several fights over the last few episodes of the show, and the April 1 episode is no different. Katie gets jealous and angry when Derek gets too friendly with Taylor and the two get into another explosive argument while away on a couples’ retreat, so fans might be wondering if the two are still together today or if they split up.

WARNING: SPOILERS AHEAD! If you don’t want to know the fate of Katie and Derek’s relationship, stop reading now!

According to Instagrammer @mafsfan, the two are no longer together today. Katie and Derek decided to stay together on Decision Day but have since broken up, according to spoilers released by the page. The Instagrammer posted two clips with spoilers on their relationship status; the first one reads, “Katie and Derek stay married on decision day,” and the second one noted, ”but they are no longer together as of the reunion show.” 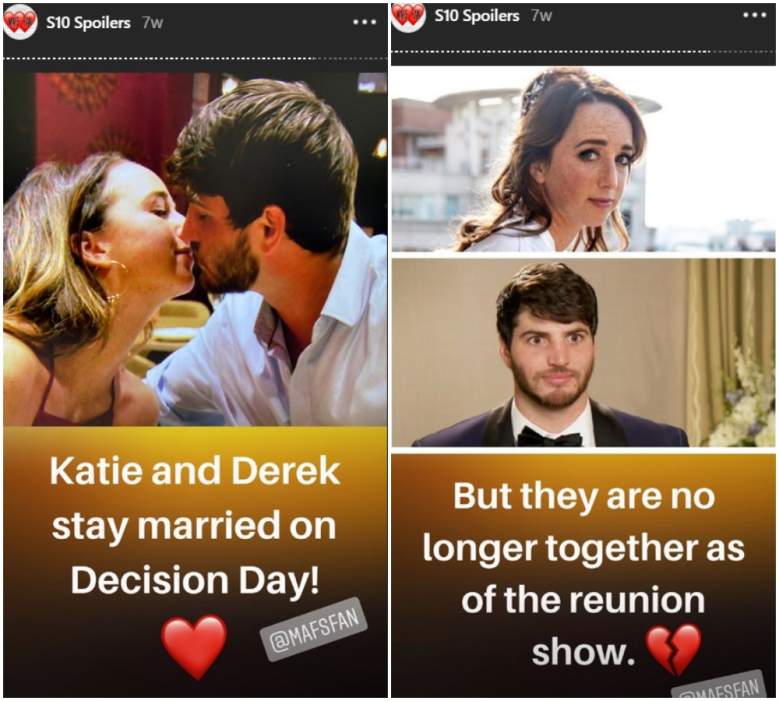 Katie and Derek are no longer together, according to Instagrammer @mafsfan.

Keep in mind we likely won’t know for sure what’s going on with Katie and Derek until the season wraps up due to contractual obligations to Lifetime, but @mafsfan hasn’t failed us yet with Season 10 spoilers, so they are likely no longer together today. Keep reading for details on their relationship:

Katie & Derek Were One of the Stronger Couples in the Beginning

Shall we begin the best night of the week? I think so. ? #MarriedAtFirstSight is on RIGHT NOW! #LifetimeAndLounge #HereForYou

Katie and Derek were one of the stronger couples early on in the season. The two clicked from the very beginning when they first met on their wedding day. Both reality stars seemed to be genuinely interested in each other during the wedding reception and even stole a few kisses while dancing, taking pictures and sharing dinner. They had a lot in common and both Katie and Derek seemed excited to see what the future held for their relationship moving forward.

Derek attempted to do many sweet things with Katie throughout their time together as well, including planning sexy baths together (complete with chocolate covered strawberries and champagne), surprising her with photo albums and various gifts, and even showing her mementos from his childhood, although that somewhat backfired since Katie got a bit jealous over an ex-girlfriend and a poem Derek wrote in high school.

Unfortunately, the “honeymoon phase” of their relationship didn’t last long, and the reality stars’ marriage quickly started falling apart after they returned from Panama. Not only was Katie concerned that Derek wasn’t ready to fall in love, she didn’t believe his dreams were realistic and she didn’t support his goals. Derek struggled with Katie’s attitude, at one point calling her a “b–ch,” and he didn’t understand why she couldn’t support his dreams. Katie also admitted to still being hung up on an ex after he texted her, and the two didn’t always see eye-to-eye when it came to their future.

Katie and Derek ran into a rough patch during their anniversary as well; in the clip above, the two can be seen arguing while out to dinner. Katie tells Derek that he’s “pissing [her] off,” and she confronts him on a recent argument the two had, when he told her “no offense but f–k off.”