Chris D’Elia has been accused of “grooming” underage girls and asking for nude photos, among other offenses, by dozens of women. The firestorm of accusations started when Simone Rossi, an Arizona State graduate, tweeted about an online interaction she says she had with the comedian in 2014 and 2015. Rossi says D’Elia “groomed” her for a sexual interaction and that the only reason she and D’Elia did not get involved was that she had a boyfriend at the time.

Rossi’s Twitter thread has since set off a chain reaction of dozens of stories from other women about interactions they say they had with D’Elia over the years.

D’Elia, 40, is a comedian and actor known for his Netflix specials, podcast, and standup routines. His most recent Netflix special, No Pain, came out in April. To TMZ, D’Elia gave the following statement on June 17, a day after the accusations flooded Twitter:

“I know I have said and done things that might have offended people during my career, but I have never knowingly pursued any underage women at any point. All of my relationships have been both legal and consensual and I have never met or exchanged any inappropriate photos with the people who have tweeted about me. That being said, I really am truly sorry. I was a dumb guy who ABSOLUTELY let myself get caught up in my lifestyle. That’s MY fault. I own it. I’ve been reflecting on this for some time now and I promise I will continue to do better.”

Rossi’s tweet came on Tuesday evening, when she pointed out what she perceived to be the “irony” of D’Elia being cast in the second season of the Netflix series You. She wrote, “I still can’t believe netflix cast chris d’elia as the pedophile in season to of ‘you’ like the literal IRONY”

She added in a subsequent tweet with screenshots of her alleged interaction with D’Elia, “imagine being 16 and being groomed by a stand up comedian twice ur age and the only reason you never met up and never got physically m*lested was because u had just gotten a boyfriend ur own age.”

Countless other stories have since been posted to Twitter. In an account that has now been made private, one woman tweeted of D’Elia, “He’s trash. He put me on the list at a venue to see him perform and casually said I could then meet him in his car behind the building and suck his [expletive]. I made up an excuse and never showed up.”

imagine being 16 and being groomed by a stand up comedian twice ur age and the only reason you never met up and never got physically m*lested was because u had just gotten a boyfriend ur own age pic.twitter.com/xq7XDrat8i

According to her LinkedIn profile, Rossi is a recent graduate of Arizona State University with a degree in political science. You can read her full thread about D’Elia here.

Rossi claims D’Elia DMed her in 2014 while she was in high school after she tweeted about some of his jokes. She shared what she says are screenshots of parts of her conversation with the comedian in which he asks for a picture and she sends him a picture of a panda. It’s not clear how the alleged conversation started or ended.

Rossi wrote, “for the longest time i thought it was embarrassing for ME that i was interacting with this older man but he was the one who DM’d me on twitter and was the one who was twice my age and was the one that used the power imbalance between us to his advantage so f*ck chris d’elia.”

She added in another tweet, “… i realized what happened isn’t normal and that he was and could still be doing this to younger girls and it’s my job to say something” 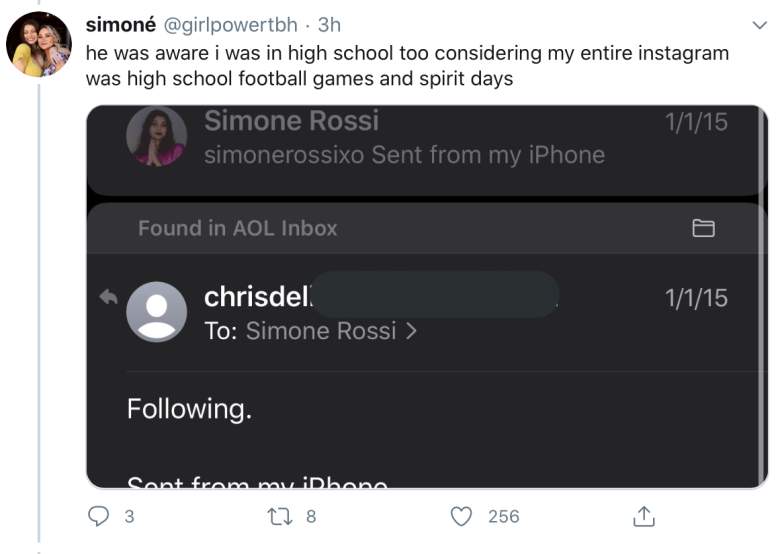 A Twitter sleuth has since dug up an old tweet of D’Elia’s that shows he was in Arizona during the exact time indicated by Rossi’s screenshots of messages she says are from him.

Geez this one includes blackmail pic.twitter.com/9YFszaIQY4

A few hours after Rossi tweeted her story about D’Elia, the Twitter account SheRatesDogs started a Twitter thread of accusations by many women against D’Elia, all of which are from anonymous senders. The account started the thread by tweeting, “This is crazy because I’ve literally had this sent to me about Chris D’Elia as well.”

The thread goes on and on. All of the submitted stories are anonymous, which is standard protocol for SheRatesDogs. In one story, a woman said she got in touch with D’Elia after tweet-quoting some of his jokes, and that D’Elia offered to fly her out to L.A. to “hook up.”

“I never answered after that but it was weird,” the woman wrote to SheRatesDogs.

Two more- one 16 one 19, all teenagers pic.twitter.com/t0JjRKapD9

Other users have since tweeted their own D’Elia stories outside of the SheRatesDogs thread. One user tweeted, “although i’ve been publicly saying it for years, F**K Chris D’elia. he solicited nudes off of me when i was 17 years old and constantly messaged me whenever he was touring vancouver and asked me to come backstage to his shows.”

A comedian named Emma Arnold tweeted, “When I was a brand new comic, one of Delia’s best friends warned me to never send Chris nudes bc he made them into memes and showed to other male comics at shows. Looks like some of those memes were probably of underage girls. No wonder I don’t miss comedy yet.”

Another user tweeted a thread about an “uncomfortable” series of interactions she had with D’Elia at various comedy shows with her husband present, in which D’Elia was “pushy” with her. She wrote, “I think if I didn’t have someone in my life who I was about to marry it could have taken a much different turn.”

Chris D’elia also hit me up when I was 18. https://t.co/5KLRKLqKCY pic.twitter.com/OkqRssUaUk

Many of the screenshots shared show D’Elia’s photo and account information, some even showing a verified checkmark next to his name, which appears on some platforms like Twitter to establish legitimacy with public figures.

Though D’Elia has reached household-name status in recent years through his work as a comedian, he’s kept his private life almost completely under wraps. He is rumored to be dating or engaged to Kristin Taylor, a stop-motion animator. He was previously married to Emily Montague from 2006 to 2010.

READ NEXT: WATCH: Woman Posts Racist Tirade, Gets Kicked Out of Party City