Lala Kent got candid with her followers recently as the “Vanderpump Rules” star posted on her Instagram Stories about her life being “weird.”

Kent posted a photo of an upcoming event on October 1st in New York City and wrote on top of it, “I’m going to be vulnerable AF right now.”

“I can’t wait to hang out with you guys in New York,” she continued. “My soul is in need of this. Life is weird right now, and being around my people in a supportive & uplifting environment is what I need at this moment. I’m counting down the days,” she concluded with a heart emoji. 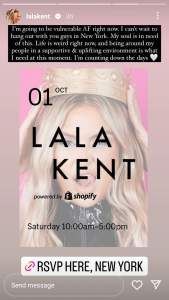 The photo Kent shared on her Instagram was for an event on Saturday, October 1, from 10 a.m. to 5 p.m. at Shopify New York at 131 Greene Street. The event’s description reads that it is Kent’s “first ever pop-up” and will feature all of Kent’s brands under the “Give Them Lala” umbrella, including merch, baby products and her beauty line.

The event description also states, “Join us at 1pm for an exclusive 1:1 interview and Q&A with Lala, moderated by Sofia Franklyn. You won’t want to miss it!” The moderator Franklyn is the well-known host of the “Sofia With an F” podcast.

Kent also has another event at the same location on Friday, September 30, from 6 p.m. to 9 p.m. The event’s description states, “Join Lala Kent and Shopify NY for an opening night party to celebrate Lala’s first ever pop-up shop!” That event will also feature all of Kent’s brands and will serve “craft cocktails, light bites, and music during this preview ahead of the weekend’s public shopping experience.”

The 10th season of “Vanderpump Rules” just wrapped production and Kent teased some information about the highly anticipated season during a recent episode of her “Give Them Lala” podcast.

The Utah native said that she had to work to compartmentalize parts of the show to keep it separate from her home life. The mother-of-one shared on her podcast that she can think of at least two occasions during the season where she realized that she brought the show home with her and it’s affected her personal life. “You know, it’s our real lives, it’s our lives for real so it’s very hard to be like ‘I’m just going to go home now and not let it affect me,’” the Pump Rules cast member explained.

Despite that, the reality star said she thinks the 10th season will be a really good one, even though she has said that in the past. Kent said it’s impossible to show everything but there was definitely drama among the Bravo cast members and the dynamic of the group has changed. Kent described their friend group as “resilient” but said even knowing that, she’s not sure that some of her co-stars will be able to come back from certain things that happened.

Loading more stories
wpDiscuz
0
0
Would love your thoughts, please comment.x
()
x
| Reply
Lala Kent got 'vulnerable' recently and spoke about her life being 'weird' at the moment.