Fans of “Dancing with the Stars” got a big surprise when the season 30 cast list was revealed on “Good Morning America.”

Actor Brian Austin Green was announced as one of the competitors in the ABC celebrity ballroom competition. And as a bonus, it had already been teased that the 48-year-old “Beverly Hills, 90210” alum will be partnered with his girlfriend, pro dancer Sharna Burgess, 36.

Green told “GMA” that while he’s ready to trade the Peach pit for a Paso doble, his goal this season is “just not hurting myself.”

He also confirmed that there is no dancing at home with Burgess, just “watching television, raising kids.”

“I’m all in,” Green added. “I’m just trying to set the bar as low as possible so there’s no expectations, so I have nowhere to go but up.” 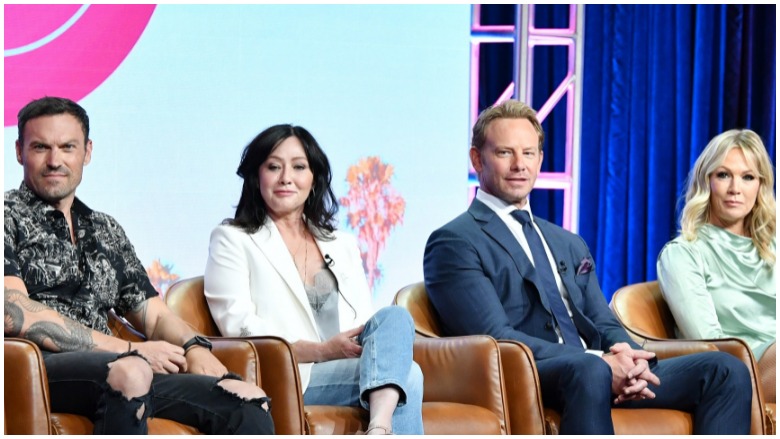 Green, who played David Silver on “Beverly Hills, 90210” from 1990 to 2000, will be the fourth cast member from the ’90s teen drama to compete for the mirrorball trophy on “Dancing With the Stars.”

Fans may recall Ian Ziering (Steve Sanders on “90210”) competed in season 4 of the show with pro dancer Cheryl Burke. The duo landed in fourth place, according to ShowBiz CheatSheet, and Burke was later vocal about how much she disliked dancing with the actor.

And in season 10, Shannen Doherty (aka Brenda Walsh)  was partnered with Mark Ballas, but she was the first contestant eliminated.

Tori Spelling (Donna Martin) has long been rumored as a “Dancing With the Stars” contender, going back as far as season 9,  per Pure DWTS. But Spelling has admitted the idea of competing on the show makes her nervous.

“I used to say, ‘Maybe,'” Spelling told Zap2It, according to IMDb, “But it’s gotten so crazy –competitive and so amazing. The people who are doing it aren’t like celebrities trying it, they’re like dancers. I mean, they have Olympians on there who excel in gymnastics.”

Green Doesn’t Have Dance Experience, But His Relationship With Burgess Could Give Him an Edge

Green won’t have to fake the passion in his “DWTS” dances, considering he will be paired with his real-life girlfriend.

In an interview with Access Hollywood, the actor revealed that he first met the Australian pro dancer in 2020 after their shared business manager arranged an introduction. He liked that his future girlfriend revealed she wasn’t familiar with his work as an actor on “Beverly Hills 90210.”

As for Burgess’ work, she was supposed to partner with Green for season 29, but he pulled out of the competition so she was paired with actor Jesse Metcalfe instead.  In July 2021, Burgess told Parade she was happy she didn’t meet Green while on the celebrity ballroom show.

“It’s definitely better that Brian wasn’t my dance partner on ‘Dancing With the Stars‘ because I don’t ever get romantically involved with my partners,” she said. “For me, that is business; it’s work. It’s my passion. I want it to be perfect. And I think those that sometimes get personally connected in ways others than dance and friendships, it can overcomplicate matters. And so, I like to do a good job, and the dancing comes first.”

Green and Burgess won’t be the first real-life couple to perform together on “DWTS.” Multiple romances have been made on the show after the celeb-pro pairings were announced, but in season 8 pro dancer Julianne Hough was partnered with her then-boyfriend, country singer Chuck Wicks, up front, per E! News.

Even with their pre-show chemistry, Green and Burgess will have their work cut out for them. Several athletes and contestants with prior dance experience have been cast on the landmark season of “Dancing With the Stars,” including Broadway star and dancer Amanda Kloots, Olympic gold medalist gymnast Sunisa Lee, and “Real Housewives of Atlanta” alum Kenya Moore, who once told the Atlantic Constitution Journal that she has  been a “trained dancer” since age six and has “taken a lot of professional classes.”

Discover more from Heavy on Dancing With The Stars↓

Unlock the latest Dancing With The Stars news, rumors and exclusives — direct to your inbox. ↓

Loading more stories
wpDiscuz
0
0
Would love your thoughts, please comment.x
()
x
| Reply
The actor will be partnered with his girlfriend on season 30 of ABC's celebrity ballroom competition.