Walker told Deadline about the new contract: “I’m humbled and grateful to have been a part of the Hallmark family for a decade now. I love diving into each character, to create quality films with positive content that make people feel good. The impact this network is making on its viewers is infectious and I’m thrilled to be continuing our collaboration.”

Walker’s first movie with Hallmark was “A Bride for Christmas.” He most recently starred opposite Nikki DeLoach in the mystery movie, “Curious Caterer: Dying for Chocolate.” He also starred in the 2021 Christmas movie, “My Christmas Family Tree.” His Christmas movie ranked second in terms of live/same-day viewers, only ranking behind “Christmas at Castle Hart,” according to ShowBuzz Daily numbers, shared by the Twitter account @SleepyKittyPaw.

Hallmark's THE WEDDING VEIL got more live viewers (3.394 million) for the network than any movie in 2021, and it's only January 11. https://t.co/2BYFfTLnu0 pic.twitter.com/pN3UvZfklB

Lisa Hamilton Daly, Executive VP Programming, told Deadline about Walker’s new contract: “Andrew has a special talent and charm that shines through in every role. He’s become a favorite among our viewers for good reason. We couldn’t be happier to continue our partnership with Andrew and can’t wait to see him in his next role.”

Walker first shared the news on his Instagram story. 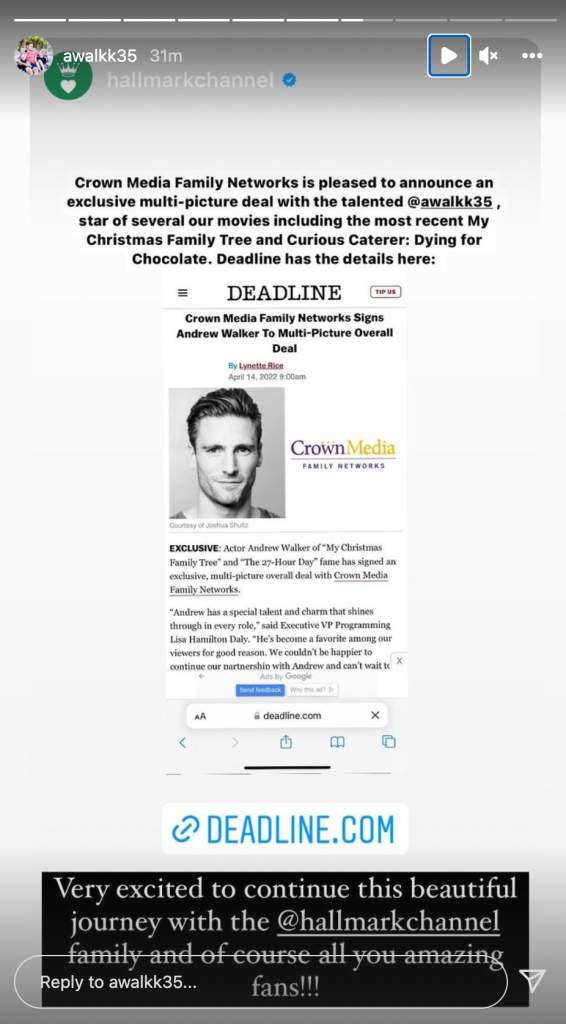 He wrote, “Very excited to continue this beautiful journey with the @hallmarkchannel family and of course all of you amazing fans!!!”

When Hallmark shared the news on Instagram, they were flooded with excited comments from fans.

Adrienne Ragan wrote, “❤️❤️❤️ such a talented actor. Thank you for signing him.”

Over the Christmas season, Walker and fellow Hallmark star Tyler Hynes got a lot of attention when they appeared in cameos in each other’s movies. Walker appeared in “An Unexpected Christmas.” The cameo scene showed Walker running into Hynes at a bar that was decked out for Christmas, while Hynes’ character was meeting up with co-star Bethany Joy Lenz. You can watch the scene in our story here.

Hynes had a surprise cameo in Walker’s “My Christmas Family Tree.” Hynes played the role of an employee at a coffee shop during the first part of the movie. You can see photos of that iconic moment in our story here.

Walker is planning another surprise for fans. He and Paul Greene are hosting a special four-night cruise event in 2023.