Angelina Pivarnick appears to be working on her marriage.

The “Jersey Shore: Family Vacation” star was spotted out and about with her husband, Chris Larangeira, amid rumors that their marriage is on the rocks. Pivarnick and Larangeira were recently spotted dining together at Ganga Asian Bistro in Matawan, New Jersey,  according to E! News.

“He was paying the bill,” an insider told the outlet of the couple’s date night. “Her ring was on.”

Pivarnick’s Rocky Marriage Has Been an Ongoing Storyline on ‘Jersey Shore: Family Vacation’ 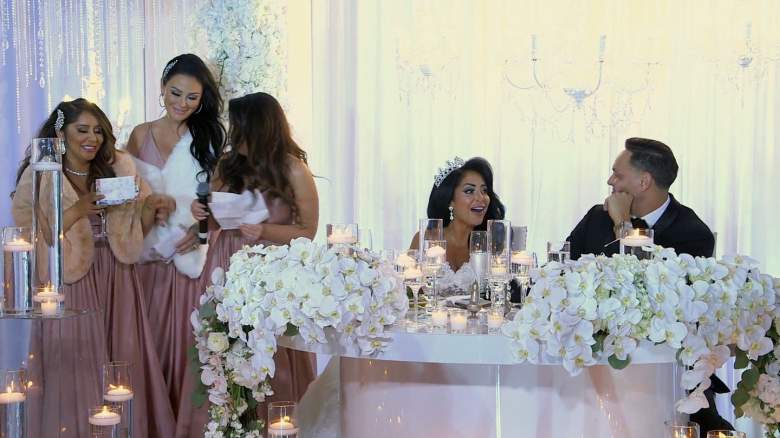 MTV“Jersey Shore” star Angelina Pivarnick broke down in tears when her female roommates gave a mean-spirited speech at her wedding.

Pivarnick’s marriage to Larangeira seemed to have been doomed from the start.  The couple’s wedding day in November 2019 was ruined thanks to a mean-spirited speech delivered by bridesmaids Nicole “Snooki” Polizzi, Jenni “JWoww” Farley,  and Deena Cortese.

And Pivarnick later complained about her sexless marriage after her co-stars threw her a wedding re-do in Las Vegas.

“Unfortunately, Chris and I did not have sex, and there was no sex on the real wedding night either,” she said on the show earlier this year,  per Us Weekly. “Maybe on the redo, we’ll finally have sex. Probably not but I’m just saying. Yeah, it’s probably not going to happen. It never happens anyway. We never have sex.”

More recently, a “Jersey Shore” storyline revealed that Larangeira moved out of the house he shared with Pivarnick and other scenes hinted that the MTV star cheated on her husband, allegations that she staunchly denied.

“We’re always going at each other. The resentment is there, but the now the non-trust is there, as well now because he moved out,” Pivarnick said,  per The Sun.

Larangeira and Pivarnick later reunited and tried to work things out. He joined her on a cast trip to the Pocono Mountains, where Pivarnick later opened up about her marital woes and slammed her husband for sharing their personal business on social media.

“We have a lot of work to do when we get home. A lot,” she said in a confessional.

Pivarnick told Us Weekly that the COVID-19 pandemic put an extra strain on her marriage.

“It was a lot with this pandemic,” she told the outlet. “Unlike Pauly D and Nikki Hall, it didn’t really help our relationship out too much. It kind of did the opposite.”

Pivarnick added that she and her husband are taking their marriage “day by day,” but that she eventually does want to start a family.

Pivarnick Filed For Divorce in January 2021

The “Jersey Shore” scenes in which Pivarnick and Larangeira were trying to work on their marriage were filmed earlier this year. But according to Us Weekly, Pivanick actually filed for divorce from her husband in January 2021. It is unclear if the 42-year old sanitation worker was ever served the documents from his wife’s New Jersey courthouse filing.

In May, the two were photographed together at the MTV Movie & TV Awards, and Larangeira congratulated his “wife” and the rest of the “Jersey Shore” cast for their win for Best Docu-Reality Show at the inaugural awards ceremony.