Jersey Shore stars Jenni “JWoww” Farley and Nicole “Snooki” Polizzi had a wine-fueled sleepover, and it made fans nostalgic for their adorable dynamic on reality TV.

More than a year after Snooki quit the Jersey Shore: Family Vacation spinoff, the Jersey-based besties reunited for an overnight party and took fans along for the ride.

In a series of posts to her Instagram story, Snooki gave fans an inside look at the fun night she had with JWoww. The Snooki Shop owner shared photos of bottles of Coppola Claret and Merlot as well as a platter of cheese, salami, and crackers as they hung out in JWoww’s spacious kitchen while she sliced a loaf of French bread for their spread.

“Sleepover at my sissy’s,” Snooki captioned a clip of her sipping on red wine.

In other photos, JWoww was seen playing with a Nerf gun during a battle with her boyfriend Zack Carpinello and kids, but her BFF was more content on staying on the sidelines.

She also zeroed in on a tired  JWoww who asked if they should do down to the basement where the rest of their families had gathered.

‘She was stuttering as she adjusted her glasses,” Snooki joked of her friend.

“Omg is she 95?” she captioned a pic of JWoww yawning. 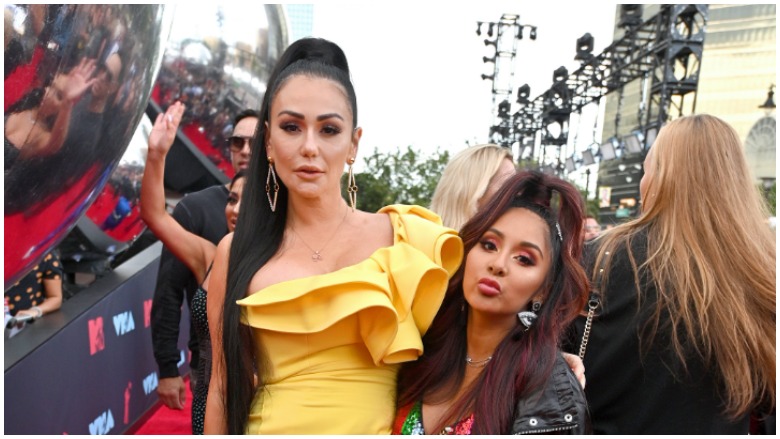 Snooki recorded her trip downstairs on JWoww’s gray-carpeted basement steps as she marveled over her pal’s “fluffy stairs.”

“So JWoww is rich rich,” Snooki said in the video. “We got fluffy stairs and we have a JWoww theater.”

The former  Jersey Shore: Family Vacation star then zoomed in on the entrance to the Woww Theater, which included a Coca Cola bistro and candy counter filled with Twizzlers, M&Ms, Skittles, Sour Patch Kids, and more boxed movie theater treats.

Pop culture décor including a stuffed Groot from the movie Guardians of the Galaxy and a Spiderman statue on the wall also adorned the space.

“Is she famous?” Snooki asked, before asking JWoww directly, “Are you rich?

Snooki ended her tour by panning across the movie theater and jokingly writing, “Rich hoe @Jwoww.”

While it appeared to be an all-night party, Snooki later updated her story to tell fans that Jenni carried her upstairs like “an infant” at 10 p.m.

“The perfect sleepover night,” she wrote.

JWoww isn’t the only incredibly rich Jersey Shore star.  All of the roommates, including Mike “The Situation” Sorrentino, Deena Cortese, Vinny Guadagnino, Ronnie Ortiz-Magro, Pauly D,  and  Angelina Pivarnick have amassed millions due to their reality TV fame and outside ventures.

According to TV Insider, as of 2019 both Snooki and JWoww had a net worth of over $4 million each thanks to TV shows,  public appearances, books, clothing lines, makeup products,  and more.

Snooki has written five books and has hosted a podcast, launched a line of balms and lounge clothing,  and now has her own Snooki Shop.

JWoww’s wealth can be attributed to her multiple reality shows, her Naturally Woww skincare line, and her self-tanning lotion. She has also been a brand ambassador for Shoe Dazzle and Fashion Nova.