A blogger who was known for his appearances on Love & Hip Hop: Hollywood recently slammed Megan Thee Stallion on his new Instagram TV show. Jason Lee, who owns Hollywood Unlocked, called her “aggressive” during his IGTV show, Gagging With Jason Lee.

During the last episode, he spoke about the “Girlz in the Hood” rapper’s behavior at Cardi B’s birthday party, saying Megan Thee Stallion was “drunk as hell” while confronting her former stylist, EJ King, over unfinished business. Lee then insinuated that based on the way she was acting, he believed her behavior could’ve provoked Tory Lanez to shoot her back in July.

Lee also said that he doesn’t see the rapper as a victim but as someone “who gets intoxicated and can’t handle her liquor.”

He added: “Maybe you jumped on Tory and he defended himself. He’s only 4-foot-3.” (He’s actually a foot taller than that, according to Showbiz CheatSheet.)

Lee also gave Lanez a word of advice regarding how he should proceed with the allegations against him:

You need to start building your story that you were being attacked and had to defend yourself because she was beating you up. Now I’m not here to say that’s what happened and I’m not here to condone shooting a woman because now she’s on this whole ‘Protect Black Women’ s***.  She’s trying to blend the lines between Breonna Taylor getting shot in her home and killed by the police while she was sleeping with her man and got up because she thought she was being robbed, and her probably drunk attacking her boyfriend like she attacked her stylist for wanting his money!

Watch Gagging With Jason Lee below.

Unpacking what went down between #MeganTheeStallion and her ex-stylist #EJKing at #CardiB’s big birthday bash 🤭🤭🤭🤭 click link in bio for more!

If spending time with you don’t make me smile like this I don’t want it. Cheers to the weekend!

Lee also shared his opinion about where Megan Thee Stallion’s rap career is headed. In addition to calling her “young” and “naive,” Lee said he feels her career will not reach the heights of other famous female artists.

He also said he called Megan Thee Stallion to get her side of the story but she didn’t answer his call.

Tory Lanez Has Been Charged With Shooting Megan Thee Stallion 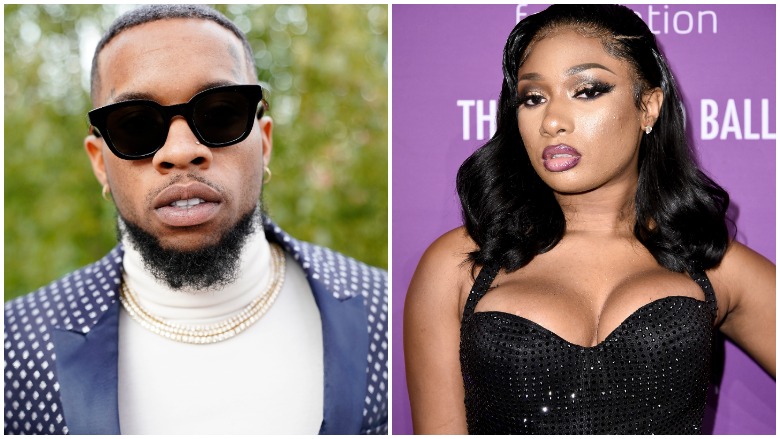 According to the Los Angeles District Attorney’s Office, Lanez has been charged with “one felony count each of assault with a semiautomatic firearm, personal use of a firearm, and carrying a loaded, unregistered firearm in a vehicle.” If he is convicted, he “faces a possible maximum sentence of 22 years and eight months in state prison.”

“Every insider to this situation knows it was an accident, not intentional,” the source told us. “Megan wasn’t directly hit with a bullet, it was shards of bullet fragments from one shot that ricocheted.”