Rookie Emanuel Neagu and four-time “Challenge” competitor Tula “Big T” Fazakerley didn’t have any bad blood during “Spies, Lies and Allies” but the two recently clashed on social media after Big T reacted to some of Emanuel’s comments about her.

During Big T’s final episode, viewers saw Emanuel and Emy Alupei speaking about Emanuel’s decision to vote Big T into elimination. Emanuel told his fellow rookie, “I voted for Big T because in my eyes, Big T doesn’t deserve to be here.” Big T was asked about his comments in an Instagram Q&A and she posted a long reply saying that she found his comments hurtful because she gave her heart and soul to every season she appeared on.

Just because Emanuel is a good competitor physically does not mean that he has the right to act self-entitled. It’s this kind of attitude and commentary that I really don’t like. I think people need to humble themselves and stay in their lane.

She also wrote that she believes cast members should stick to being cast members and leave the decisions about who deserves to be cast to the production team. “I think that the only people who do not deserve to be on ‘The Challenge’ are the people who are verbally and physically abusive to people. Apart from that, anyone who has the courage to walk into that house deserves the experience.”

Big T also called out Emanuel, saying she wasn’t sure what he brought to the show apart from “being desperate to have a showmance with anyoneeee to guarantee his call back.” She wrote that some people have gotten “cocky” and “comfortable” on the show but all of them can be easily replaced.

Emanuel Replied to Big T’s Comments in an Instagram Story of His Own, Explaining His Perspective 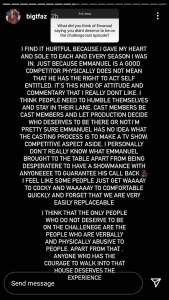 Big T’s comments set off a back-and-forth in their Instagram Stories about the show. Emanuel replied that Big T “wanted to quit” and had her suitcase packed and ready to go. He said he didn’t think a quitter deserved to be on the show because others would do anything to be in her spot.

He said he didn’t want to bring that up on Instagram but her fans were “going too wild” and threatening him. “I thought we were friends,” he concluded. He later posted, “In a game against rookies, I haven’t seen an elimination yet. I must be doing something right, whatever that is.”

Big T replied to Emanuel’s story and said she had already spoken to him about it on Messenger. “I don’t believe you and I think [you’re] trying to use an isolated incident as justification,” she wrote. The “Shipwrecked” star explained that the night she said she wanted to quit she was simply being dramatic because people were attacking her for comforting Bettina. She said she asked for her suitcase but never packed it.

She even explained that other cast members packed their suitcases that season without leaving but questioned why he didn’t say those people didn’t deserve to be there. “Call me a s*** competitor, I don’t care,” she wrote. “But don’t ever tell me where I do and do not deserve to be.. It’s not your prerogative.” The reality star concluded, “In the house you were very kind and level-headed amongst the meltdowns and chaos. I’m not trying to villanise you, I’m reacting to what I’m seeing and hearing with my own eyes.”

Big T was recently eliminated from “The Challenge: Spies, Lies and Allies” and after her departure, she wrote on Instagram that she was done with the show for the foreseeable future. She wrote that the same day of her last “Challenge” episode, she also found out that she got accepted to cooking school.

She told her followers, “This is the end of my challenge career , for now …. I’m a dreamer and I can’t wait for my next adventure. However, I will keep training and pushing my self , as tj says ‘always stay ready.’”

She said she wished she could have made a final in her time on the show but the friendships that she built in such a cutthroat game made her feel like a winner. Many of Big T’s co-stars shared their love and support for her decision in the comments of her post. However, as part of the same Q&A on Instagram after her final episode aired, Big T said there are a lot fewer “non fake” people on “The Challenge” than fake people.

She said some of the people who were “trashing” her in their confessionals were the same people “begging me to come back to do another season” after she announced her retirement. She specifically thanked Kaycee Clark, Nany Gonzalez and Kyle Christie for being very supportive toward her.

Loading more stories
wpDiscuz
0
0
Would love your thoughts, please comment.x
()
x
| Reply
Two competitors on 'The Challenge' got into an argument on social media recently over comments that one of them didn't deserve to be on the show.