“Real Housewives of Salt Lake City” star Jen Shah has pleaded guilty to conspiracy to commit wire fraud in connection with telemarketing in a surprise move just days before her trial was set to begin in Manhattan federal court. The other charge against Shah, conspiracy to commit money laundering, was dropped, according to Inner City Press, who was tweeting from inside the New York courtroom during the July 11, 2022, hearing.

U.S. Attorney for the Southern District of New York Damian Williams said in a statement, “Jennifer Shah was a key participant in a nationwide scheme that targeted elderly, vulnerable victims. These victims were sold false promises of financial security but instead Shah and her co-conspirators defrauded them out of their savings and left them with nothing to show for it. This Office is committed to rooting out these schemes whatever form they take.”

A previously unannounced hearing was added to the court record just hours before the hearing began, according to the docket viewed by Heavy. The new listing stated, “IT IS HEREBY ORDERED that the change of plea hearing will take place on July 11, 2022, at 10:30 a.m. in Courtroom 23A. SO ORDERED. (Change of Plea Hearing set for 7/11/2022 at 10:30 AM in Courtroom 23A, 500 Pearl Street, New York, NY 10007 before Judge Sidney H. Stein).”

According to Matthew Russell Lee, of Inner City Press, Shah pleaded guilty to count one of the indictment and said she understood it meant she was giving up her right to a trial and admitting that she knowingly entered into an agreement with others to violate the law. Shah, 48, of Park City, Utah, was charged in March 2021 and has been free on bond since.

Inner City Press reported that Shah would be required to forfeit $6.5 million, pay up to $9.5 million in restitution and will be facing several years in prison when she is sentenced on November 28, 2022. Shah, who will remain free until her sentencing, had previously maintained her innocence and said on the season 2 reunion for “RHOSLC” that she was going to fight the case.

“I’m fighting this. I am innocent. And I will fight for every person out there that can’t fight for themselves because they don’t have the resources or the means, so they don’t fight,” she told Andy Cohen, when asked why she wasn’t taking a guilty plea. Her former assistant, Stuart Smith, who was also one of the 11 people charged in the case, did plead guilty and is awaiting sentencing. He was going to be a witness in Shah’s trial, which was set to begin on 18.

Shah’s attorney, Priya Chaudhry, said in a statement to Page Six, “Jen pled guilty because she wants to pay her debt to society and put this ordeal behind her and her family. Ms. Shah is a good woman who crossed a line. She accepts full responsibility for her actions and deeply apologizes to all who have been harmed. Ms. Shah is also sorry for disappointing her husband, children, family, friends and supporters.”

A source told People, “Obviously her legal troubles have not been easy for Jen, let alone making this decision to plead not guilty. Producers don’t want us to stop following it now. They’ll keep filming with her as long as they can, just like they did with Teresa.”

Jen Shah Could Face Up to 30 Years in Prison on the Conspiracy to Commit Wire Fraud Charge, but Her Plea Agreement Will Likely Call for Her to See Much Less Time Behind Bars

The charge of conspiracy to commit wire fraud in connection to telemarketing carries a potential sentence of up to 30 years in federal prison, according to the U.S. Attorney’s Office for the Southern District of New York. But Shah’s plea agreement likely means that prosecutors will ask for much less time behind bars. It will be up to Judge Sidney Stein to decide Shah’s sentence, based on federal guidelines. The plea agreement in Shah’s case has not been filed publicly yet.

Shah is accused of taking part in a fraud scheme that began in 2012 and led to hundreds of people being victimized, according to a press release from the Manhattan U.S. Attorney’s office.

During her plea hearing, Shah, according to Inner City Press, admitted to, ” Wire fraud, offering services with little to no value. We used interstate telephones and emails. I knew many of the purchasers were over the age of 55. I am so sorry.” She said the victims bought services because of, “Misrepresentations, regarding the value of the product or service, of which it had little to none,” and said “yes, your honor,” when asked by the judge if she knew it was “wrong and illegal” to do what she did.

Prosecutors said in a press release announcing her guilty plea, “From 2012 until March 2021, Jennifer Shah, together with others (collectively, the “Participants”) carried out a wide-ranging telemarketing scheme that defrauded hundreds of victims (the “Victims”) throughout the United States, many of whom were over age 55, by selling those Victims so-called “business services” in connection with the Victims’ purported online businesses (the “Business Opportunity Scheme”). … In order to perpetrate the Business Opportunity Scheme, Participants, including Shah, engaged in a widespread, coordinated effort to traffic in lists of potential victims, or “leads,” many of whom had previously made an initial investment to create an online business with other Participants in the Scheme.” They added:

Shah, among other things, sold leads to other Participants for use by their telemarketing sales floors with the knowledge that the individuals they had identified as ‘leads’ would be defrauded by the other Participants, including by lying to Victims about how much they would earn after purchasing the business services and the purported success of others who had purchased the services. Shah received as profit a share of the fraudulent revenue per the terms of their agreement with those Participants. Shah often controlled each aspect of the frauds perpetrated by other Participants on the individuals they had identified by, among other things, determining which ‘coaching’ sales floor could buy leads from them, selecting the downstream sales floors to which the ‘coaching’ sales floor was permitted to pass the leads, choosing the firms to provide ‘fulfillment’ services, that is, documents and records purporting to demonstrate that the services the Participants claimed to provide to those Victims were actual and legitimate, setting how much the downstream sales floors could charge, and determining which ‘products’ each of the downstream sales floors could sell.

Prosecutors added, “Shah undertook significant efforts to conceal her role in the Business Opportunity Scheme. For example, Shah, among other things, incorporated her business entities using third parties’ names and instructed other Participants to do the same, used and directed others to use encrypted messaging applications to communicate with other Participants, and made numerous cash withdrawals structured to avoid currency transaction reporting requirements.

Shah’s attorneys and federal prosecutors had been making last-minute arguments over her trial just days before she decided to plead guilty. Shah’s attorneys had asked the judge to prevent prosecutors from referring to those she was accused of defrauding as “victims,” saying in a court filing obtained by Heavy.

The trial had been expected to last several weeks, with both sides calling multiple expert witnesses. Smith, Shah’s ex-assistant took a plea deal in 2021 that required him to testify against Shah during the trial. Another one of her co-defendants, Derrek Larkin, pleaded guilty to conspiracy to commit wire fraud, the same charge Shah did, in January 2021. He was sentenced to 72 months in federal prison and was ordered to pay $3.2 million in restitution, according to court records. 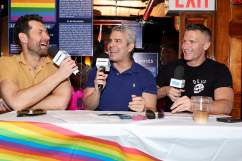