The Academy of Science Fiction, Fantasy and Horror Films announced its nominations for the 2022 Saturn Awards, with various “Star Trek”  programs and actors picking up a total of six across three shows.

This year marks the 50th anniversary of the Saturn Awards, and it comes at a time when more Trek shows are in production at one time than ever before. TrekMovie.com reported that “Strange New Worlds” and “Discovery” are nominated in the Best Streaming Science Fiction Series category. The shows are up against “The Expanse,” “For All Mankind,” “Lost in Space,” “The Mandalorian” and “The Orville: New Horizons.”

This marks the fourth time the academy nominated “Discovery,” which has won three times previously in the category. “Strange New Worlds” just finished its first season on Paramount+ where it set the record for streaming views of a Nu Trek series debut. 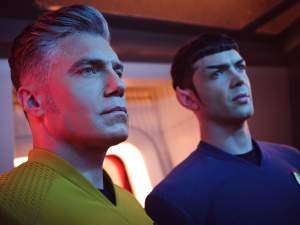 In addition to the nod for the show overall, “Strange New Worlds” also picked up three nominations for cast members. Anson Mount, who stars as Captain Christopher Pike, was nominated in the Actor in a Streaming Series category. Other nominees in the category include Tom Hiddleston for “Loki,” Oscar Isaac for “Moon Knight,” Anthony Mackie for “Falcon & The Winter Soldier,” Ewan McGregor for “Obi-Wan Kenobi,” Adam Scott for “Severance” and Antony Starr for “The Boys.”

Ethan Peck and Jess Bush, who appear in “Strange New Worlds” as Spock and Nurse Christine Chapel, picked up nominations in the Supporting Actor and Actress in a Streaming Series categories.

Peck is up against Zach Cherry for “Severance,” Ethan Hawke for “Moon Knight,” Joel Kinnaman for “For All Mankind,” Elliot Page for Umbrella Academy, Joseph Quinn for “Stranger Things” and John Turturro for “Severance.” 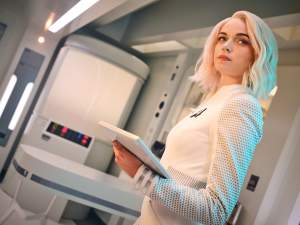 This is the first year since its debut that no cast member from “Discovery” has been nominated. Sonequa Martin-Green, Doug Jones, and Wilson Cruz are past nominees. Peck was also nominated as a guest star for his appearance as Spock in season two. Martin-Green and Jones won in previous years.

In addition to the live-action nominations, the academy also recognized “Lower Decks” with a nomination in the Animated Series category. “Arcane,” “Blade Runner: Black Lotus,” “The Boys Presents: Diabolical,” “Invincible,” “Star Wars: The Bad Batch” and “What If?” received nominations as well. “Lower Decks” is set to return to Paramount+ for its third season on Aug. 25, 2022.

A trio of actors with “Star Trek” credits were also nominated for awards in 2022. These include:

Burton took to Twitter following the announcement of the nominations, expressing his surprise at the news

Holy Moly y’all, I got nominated for an @SaturnAwards and what a stacked category it is. Wow! 💜🙏🏾 pic.twitter.com/Ql0HCLD16I

In a follow-up tweet, Burton predicted that Jensen Ackles, who was nominated for his work on “The Boys.”

The Academy of Science Fiction, Fantasy and Horror Films will hold its award ceremony on Oct. 25, with the event live-streamed on ElectricNOW.

Loading more stories
wpDiscuz
0
0
Would love your thoughts, please comment.x
()
x
| Reply
"Star Trek" shows and actors grabbed six nominations for the 2022 Saturn Awards which will be handed out in October.