Kailyn Lowry has shared her first photo with her boyfriend Elijah Scott. In the picture, posted to her Instagram Story, Lowry is holding hands in bed with a man presumed to be Scott. She geo-tagged the location as Philadelphia, Pennsylvania.

On Reddit, fans had a lot to say about the post. One person wrote, “Literally, every time. It’s honestly crazy that this is a 30yo.” 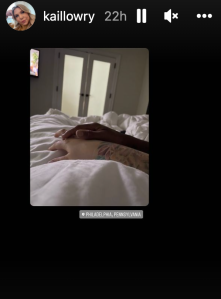 Another added, “She acts like a 8th grader just getting into a new relationship.”

And a third wrote, “I see another pregnancy shoot in the future.”

According to The Sun, Scott is 23-years-old and happens to be Lowry’s neighbor. He was previously in the Army. Online records obtained by the outlet show that Scott was previously married and filed for divorce from his wife in April 2021.

What We Know About Kailyn Lowry’s Relationship

Lowry opened up about her new relationship on the May 5, 2022, episode of the Coffee Convos Podcast.

On the topic of weddings, Lowry said, “If I ever get married again I’m not having bridesmaids or groomsmen. It’s not a day for anyone else but myself and my husband or partner.”

When Lowry’s co-host asked if that meant a wedding was back on the table, she replied, “I would say yes. I wouldn’t have, like, a huge wedding or anything. I feel like I would have a cute, very, very simple ceremony and maybe, like, a dinner afterward.”

She added that she had met the “love of her life.” Asked how she knows, she said, “So, it’s crazy because they say when you know, you just know and that’s how I feel. I feel like I’ve known him for a lifetime. Like, I feel like I have known him forever.”

Lowry’s post with her new beau was uploaded on the same evening that her “Teen Mom 2” co-star, Briana DeJesus, threw a party to celebrate her lawsuit win.

In April 2022, a judge dismissed Lowry’s defamation lawsuit in favor of DeJesus, according to US Weekly. In a statement to Celebuzz, DeJesus merely shared, “I won.”

On her Instagram Story, Lowry reacted to the ruling by writing, “I have to respect the judge’s decision. With that being said, I stand by my truth and the information spread about me is still not true. I would like to thank my legal team for fighting for me, and I am looking forward to life after this lawsuit so I can focus my energy solely on my boys and my future business endeavors.”

On her Instagram Story on the night of May 14, 2022, DeJesus posted a number of photos of the event.

The pink-themed party included cakes with writing on them that read things like, B**** Have My Money” and “I Won.” Jenelle Evans was also in attendance.

Though Evans has not been filmed as part of “Teen Mom” since being fired from the franchise in 2019, she made a number of appearances at DeJesus’ party. Evans’ Instagram Story even revealed that she got a tattoo of a dollar signed.