On a social media stroll down memory lane, Lauren Luyendyk (nee Burnham) shared the private message that she received from Arie Luyendyk, weeks after he broke her heart by choosing Becca Kufrin on his season of The Bachelor.

It all happened in 2017. Arie proposed to Becca, but, soon after, realized that he was in love with Lauren and simply couldn’t get her off of his mind. After breaking things off with Becca, Arie messaged Lauren — on Instagram. On December 31, 2020, Lauren shared a screenshot of that message to her Instagram story. The message was sent on New Year’s Eve in 2017.

“Hi Lauren… know this may be crossing a line but I’d love to talk are you free?” read Arie’s message. 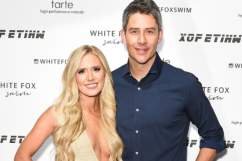 The two hadn’t used Instagram to communicate previously, as evidenced by the automatic message at the bottom of the direct message screen that asked if Lauren wanted to let Arie send her messages in the future.

Lauren did not post a photo of her response. The rest of her Instagram story from Thursday night included posts from happy memories from New Years Eve over the past two years.

Bachelor host Chris Harrison wasn’t wrong when he said that Arie’s season would be one of the most dramatic ever. However, the drama came after Arie got down on one knee and proposed to Becca. While the two seemed happy in post-show footage that aired during the last episode, fans were somewhat shocked to find out that Arie was regretting his decision to send runner-up Lauren home.

Arie reached out to Lauren on Instagram. Lauren agreed to talk to him and the two worked things out. They appeared together on After the Final Rose where Arie presented Lauren with a ring and the two sealed their relationship in front of millions of viewers.

“I made some bad decisions, but, the best decision, was running back to you,” Arie told Lauren. “I can’t imagine a life without you. You have shown me a love that is patient, a love that is kind, and I truly believe you are my soulmate. I’m ready to face this life with you, and all that comes with it, the good and the bad. I love you so much. And I want to do this in front of everyone because I want to show you that I should have done this a long time ago,” he added, dropping to one knee. You can watch the full proposal in the video above.

Arie & Lauren Were Married in January 2019, Have 1 Daughter & Are Expecting Twins

Arie and Lauren are one of Bachelor Nation’s success stories. The couple tied the know in January 2019, and welcomed their first child together, a daughter named Alessi, in May that same year.

After suffering a miscarriage earlier in 2020, which the couple announced in an emotional YouTube video, the two are overjoyed to be expecting twins. They announced the news on YouTube and shared a candid video recording of the moment they found out that Lauren was carrying two babies.

These days, the Luyendyk family lives in Arizona, but they recently purchased a new home in Hawaii.

Loading more stories
wpDiscuz
0
0
Would love your thoughts, please comment.x
()
x
| Reply
This 'Bachelor' runner-up shared the message she received from her now-husband after he chose someone else on the finale.