The Walking Dead finally returned with its long-awaited Season 10 finale. Only things are a little different now — six new episodes in Season 10 are going to air later in 2021, so Episode 16 really wasn’t technically the finale anymore. Still, a lot happened in a phenomenal almost-finale, including a lot of really close calls. Here’s a look at who lived and who died.

This article has major spoilers for Season 10 Episode 16 of The Walking Dead.

The last time we saw The Walking Dead was in April when Episode 15 aired. Originally, Season 11 was going to return this month, but the pandemic put everything on hold. Season 10 Episode 16 was supposed to on Sunday, April 12. But the editing for the episode wasn’t yet finished, so it had to be pulled from the schedule, Comicbook.com reported. They were really close to finishing the finale, so now we finally got to enjoy that episode and see how everything is being wrapped up.

The biggest death of all was Beta’s. He died with Negan and Daryl working together to take him down. Negan distracted him and then Daryl knifed Beta through the eyes. Beta had a few flashback scenes as he died and let the walkers eat him without a fight.

Before he died, his true face was revealed. Although most viewers already knew that Beta was a famous musician in The Walking Dead universe, Negan found out for the first time as he watched him die.

Fans who watch Fear the Walking Dead had already uncovered Beta’s identity a long time ago. One discussion about it was started by u/ConnectedVG, in which the photo below was shared. 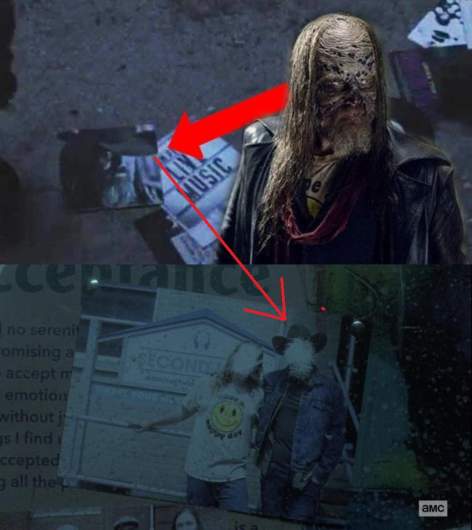 The photo above is from Fear Season 5 Episode 14, combined with a photo that was seen in an old Beta-Alpha backstory episode. In Fear, Daniel was carrying vinyl records around and dropped one that was later stepped on by a herd of walkers. Fans thought that one of the photos on the cover of Daniel’s record (the one in the hat) looked a lot like Ryan Hurst, who plays Beta. He also just happened to be wearing the same hat that you can see one of the scratched out faces wearing in Beta’s photo.

Scott Gimple confirmed that Beta was a famous singer, and it was also later confirmed on Talking Dead.

Some viewers think that fans might be concerned that the Beta fight was too short. But in terms of everything else that was happening at the time, we didn’t really need a drawn-out fight scene, in my opinion.

The shot of Beatrice noticing the blade in the hand of a Whisperer as they shuffle slowly towards her goes down as one of my favorite scenes in #TheWalkingDead, had me holding my breath in anticipation. Briana Venskus' acting was absolutely stunning this episode. #TWD pic.twitter.com/kvtqyBb4il

There were a lot of minor character deaths and deaths of unnamed characters in the episode. But one main character in “our crew” also died. Beatrice died while walking through the herd with Carol. She was a member of the Oceanside community, so she had been around for a while. She was stabbed in the ankle by a Whisperer and screamed out in pain, drawing the walkers to her.  In some ways, her death allowed Carol to escape more easily. It was hard for Carol not to turn back, but she’s learned that sometimes you have to do what’s tough in order to survive in this world.

Huge round of applause for Briana Venskus for her portrayal of Beatrice from S7E6 to S10E16 of #TheWalkingDead! pic.twitter.com/66fSjxF3me

Beatrice was the only casualty among all the people who walked through the horde to escape. Magna, Luke, Jerry, Kelly, Daryl, and Carol all survived the trek.

Big round of applause for Anthony Michael Lopez for his portrayal of Oscar from S7E15 to S10E16 of #TheWalkingDead! pic.twitter.com/P9j7xHCJJq

Oscar also died defending the wagon when the Whisperers attacked. If you looked away, you might have missed it. He was stabbed by the Whisperers.

Yes, the man who was stabbed was Oscar from Hilltop. He was the one who was holding a shield, trying to fight people off, before he was killed himself. He’s been in numerous episodes since he was first introduced in Season 7.

Quite a few walkers and whisperers also died. But these were the major deaths. It looked at one point like Gabriel was going to die, but then Maggie returned and saved him. Negan survived, Daryl survived, Carol survived despite a close call, and Lydia survived. Judith survived too.

We also learned that Connie survived. Many fans thought that she was dead, but she’s back. Only she’s in a very precarious position now.

READ NEXT: The Boys vs The Umbrella Academy: Which is Better