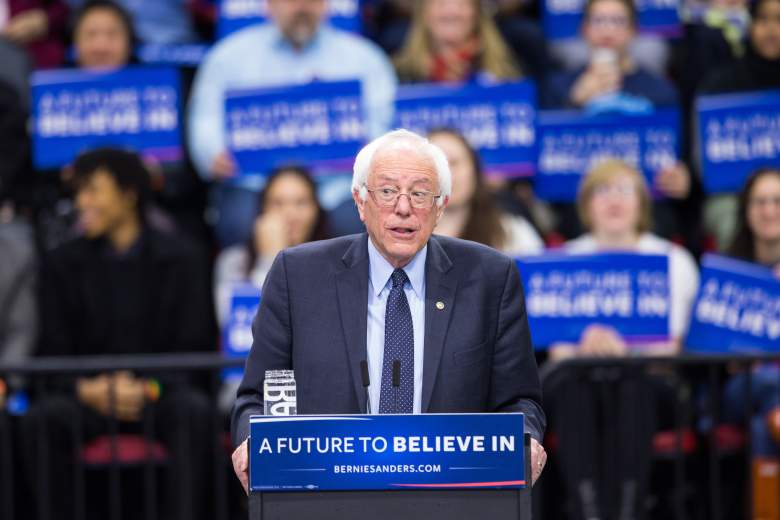 Bernie Sanders addresses a crowd in Binghamton, New York, one of the most pro-gun control states in the Union. His own gun control record is mixed. (Getty)

2016 Democratic candidate for President Bernie Sanders is getting a closer look from many people after several state wins pull his delegate count closer. As a Representative and Senator for more than 20 years, Sanders has a long voting and advocacy record on almost every hot-button issue, including one of the most contentious of them all: gun control.

Sanders’s record on gun control is decidedly mixed. Sanders has both been rated “D-” by the NRA and supported during debates by the association’s Twitter handle. He voted for popular initiatives like the assault weapons ban and universal background checks but has flip-flopped on legal immunity for gun manufacturers. His Democratic opponent Hillary Clinton has repeatedly hit him on his gun stance throughout the 2016 campaign. 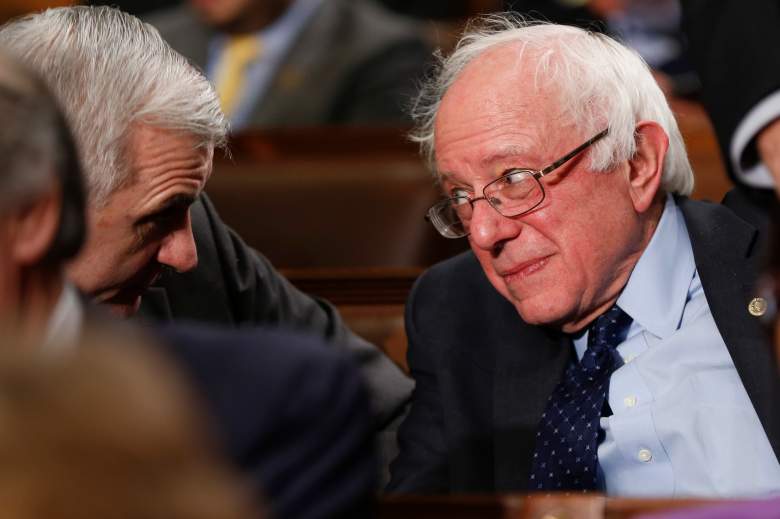 Sanders talks with a colleague during President Obama’s final State of the Union address. (Getty)

Sanders claims that his own policies respect the rights of non-violent gun owners while helping to curb the violence caused by America’s gun proliferation. He described his philosophy on guns in a recent interview:

Folks who do not like guns [are] fine. But we have millions of people who are gun owners in this country—99.9 percent of those people obey the law. I want to see real, serious debate and action on guns, but it is not going to take place if we simply have extreme positions on both sides. I think I can bring us to the middle.

Sanders points to his own state of Vermont as a model for the peaceable gun owner. Despite a 75 percent gun ownership rate, the highest in the nation, the murder rate is one of the lowest in the nation. Critics note, however, that gun homicides are rising in the state. 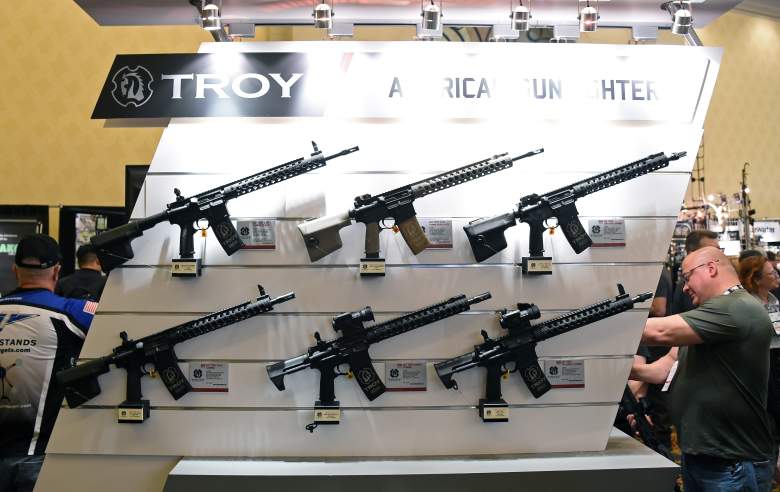 “Military-style” firearms at a trade show in Las Vegas. Sanders voted for bans on characteristically similar guns in 1994. (Getty)

1994’s Federal Assault Weapons Ban outlawed civilian possession of 18 types of firearms supposed to have “military-like features.” Enacted in the wake of the Cleveland Elementary School shooting in Stockton, California, the ban attracted criticism both for being unnecessarily strict and unworkably loose, and expired in 2004 in accordance with a built-in sunset provision. Sanders voted for the ban in 1994 and supports similar efforts now, saying in a 2013 statement:

Nobody believes that gun control by itself is going to end the horrors we have seen in Newtown, Conn., Aurora, Colo., Blacksburg, Va., Tucson, Ariz. and other American communities. There is a growing consensus, however, in Vermont and across America that we have got to do as much as we can to end the cold-blooded, mass murders of innocent people. I believe very strongly that we also have got to address the mental health crisis in our country and make certain that help is available for people who may be a danger to themselves and others.

Sanders also referred in this quote to proposals for universal background checks, which have been proposed and failed several times by Congressional Democrats and President Obama. Sanders has not universally supported background checks, however; he voted against the landmark Brady Act, which introduced waiting periods for background checks into the gun sales framework. The Sanders campaign frames his opposition as largely a concern about federal overreach, and that he also voted against Republican plans to strike down state waiting period laws.

3. Sanders Supported Immunity for Gun Manufacturers, but Now Opposes It

In 2005, Congress passed the Protection of Lawful Commerce in Arms Act preventing lawsuits against gun manufacturers when their products are used in a crime. Sanders voted for the bill, and defended doing so in the election, rhetorically asking a debate audience:

If somebody has a gun and it falls into the hands of a murderer and that murderer kills somebody with the gun, do you hold the gun manufacturer responsible? Not any more than you would hold a hammer company responsible if somebody beats somebody over the head with a hammer. That is not what a lawsuit should be about.

He also said in another debate, as seen above, that he worried about the ability of American gun manufacturers to survive in such a litigation climate.

However, in 2015, Sanders supported a bill that would do away with those protectionsra. Though he said he was “pleased” that the law surrounding the controversy would be “tightened up,” he also praised provisions in the bill that would help control unintended consequences on small gun shops and manufacturers. 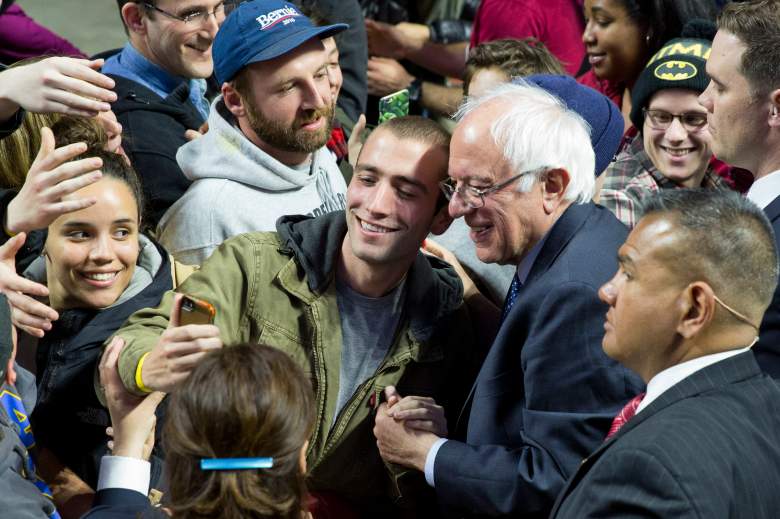 Sanders among a crowd of supporters in Wisconsin. (Getty)

While Sanders is in favor of “sensible gun control legislation,” he believes that the root of gun violence lies in the decay of the American mental health care system. In an NPR interview, he told David Greene that gun restrictions would only play a limited role in curbing gun violence:

So obviously, we need strong sensible gun control, and I will support it. But some people think it’s going to solve all of our problems, and it’s not. You know what, we have a crisis in the capability of addressing mental health illness in this country. When people are hurting and are prepared to do something terrible, we need to do something immediately. We don’t have that and we should have that.

Sanders has made mental health an integral part of his universal healthcare pitch, and has invoked gun violence in arguments for better mental health even outside the context of the gun control debate:

Sanders’s avowed concern for America’s mental health hasn’t shielded him from criticism by mental health advocates. He took heat after a debate for making a joke about the Republican candidates’ mental health that was seen as stigmatizing to those dealing with mental health issues.

Sanders’s opponent Hillary Clinton has repeatedly cited NRA support for the Vermont Senator and criticized his record on the issue of gun control, including raising the issue of the gun manufacturer immunity bill. In an early debate, Clinton took Sanders to task for having a similar record on key gun issues to the NRA’s position. Sanders responded in an interview seen above, and also called out Hillary’s support from an NRA lobbyist.

Clinton also claimed that Sanders’s Vermont constituents supplied more guns used in New York crimes per capita than any other state. Politifact rated the statement Half True, noting that a very small number of bad dealers could significantly skew the numbers for a tiny state like Vermont.

The issue is particularly pressing as the campaign turns to New York, where a formidable lawsuit was mounting in the run-up to the 2005 bill and was cited on the Congress floor in the debate leading up to its passage. Though Sanders later supported revoking this immunity, the bill resulted in the case, considered the most promising by manufacturer accountability activists, getting dismissed shortly after its passage. 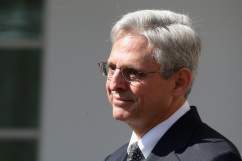 What Is Merrick Garland’s Position on Gun Control?