A popular entry from the twitter account, @selfyolympics. Here, the extremity is resemblance to Jesus rather than the usual physical or sexuality-related risks that are depicted.

The Selfie Game is an attempt to take the most extreme selfie, or self-taken pictures, possible. There is no winner nor central authority that determines a winner, but rather the game is played for social media attention.

Here’s 5 Fast Facts You Need to Know about this emerging meme:

1. A Rumor is Circulating That a Person Died Playing The Selfie Game


Huzlers.com said of the above image, ” Investigators say [the boy picture] was in his mothers restroom on January 3rd around 2AM when he fell off the door and injured his head he died from excessive bleeding.” While the story is satirical and fake, it demonstrates the basic principles of the game which are invoking danger, risk, and extreme actions to take the best possible selfie.

The post has over 5,000 likes demonstrating the virality and fascination behind the “selfie game.”

2. The Game is Also Known as the Selfie Olympics

Business Insider described the game as the Selfie Olympics as did the Daily Dot.

It appears that most popular twitter is @SelfyOlympics, but the most popular facebook page is titled “Selfie Game 2014.”

The trending tag on twitter is #selfiegame, however. This is probably the best way to get your selfies seen if you are interested in participating in this exciting new self-sport.

Alternate names and hashtags also include #selfieOlympics & #And1SelfieLeague, according to Vibe.com. 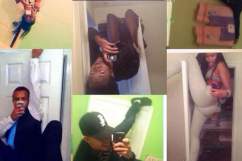 The Selfie Game & Selfie Olympics: 20 Pictures You Need to See

3. The Selfie Game Seems to Revolve Around Selfies Taken in a Bathroom or on a Door

While the rule doesn’t seem set in stone, many selfies follow this pattern:

All hail the Selfie King pic.twitter.com/YqgucT7qgt

Step your selfie game up pic.twitter.com/xLtO9YhbHL


Above is the time that the Selfie Game 2014 facebook was created. It has rapidly grown in size gaining over 28,000 likes in just over half a day.

Likewise, the SelfyOlympics twitter appears to be about the same age, and has 40,000 followers. Here is the first tweet from that account, indicating its small age:

5. There Are Multiple Unconfirmed Reports of Deaths Caused by the Selfie Game


Found on Tumblr, the trend is likely a response to the extremely viral nature of this trend. While it seems that both of the aformentioned reports of death are blatantly fake, it does stand to reason that the Selfie Game could kill someone, given its dangerous nature.

The Selfie Game & Selfie Olympics: 20 Pictures You Need to See