A group of friends found Byron the Escape Artist advertising on Craigslist, so of course they decided to hire him. What could be better than a Craigslist escape artist?
Byron started his show with the usual grandiose historicity of a magician, but unfortunately for Byron, while he may be book smart, he’s not exactly up to snuff on the actual performing of these feats.

After asking for more time to escape, and demanding absolute silence, Byron runs out of the party teary-eyed still wearing a straightjacket. Which may be his biggest fail yet: running down the city street in a straightjacket.
Check out more funny videos here.
UPDATE: Apparently “Byron” is an actor hired for a publicity stunt! Per an indiegogo campaign site:

We held a fundraiser for our upcoming short film There I Was Stuck In Babe Land. The audience was under the impression we hired an escape artist off Craigslist named Byron King. In actuality, we hired the very talented actor James R King. When the artist failed to escape, things got real tense, real fast. 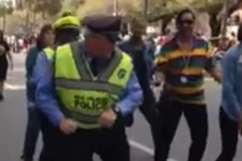 WATCH: Old Cop Does ‘Wobble Dance’ Like a Boss at Mardi Gras

Read More
Craigslist, Funny Videos, Magic, Youtube
Probably the worst idea ever after failing to escape a straightjacket is to run off into the city night while still in said straightjacket.