DALLAS AIRPORT FIGHT CAUGHT ON VIDEO – 10/23/2014To use this video in broadcast or in a commercial player please contact licensing@storyful.com Summary: An extremely troubled unnamed man gets upset, starts a fight and then gets taken down hard by host of good samaritans at Dallas/Fort Worth International Airport. Afterwards, I interview my brother Neal and he provides his thoughts on what we all just witnessed. What: An altercation Where: Dallas/Fort Worth International Airport / Gate: C 30 When: Approximately 6:45 P.M. Central Standard Time / Thursday, October 23, 2014 Why: God only knows *Other: Many have asked me for more context to the video. Basically, I was waiting for my next flight at gate C 30 with my family, heard a loud and seemingly escalating commotion, then walked over and pressed record on my phone. That is it. The rest is you seeing and hearing what I did so I really have no other information on what started it or what it was about other than what is in the video. An airport spokesperson can probably elaborate further on what happened.2014-10-24T01:06:15.000Z

An extremely troubled man caught on video at the Dallas-Fort Worth Airport accosting a man he harassed to be a “faggot” was taken down by a group of Good Samaritans.

In the video the young man approaches a man in a pink shirt at the flight attendant station and proceeds to shove him. People taken notice and take out their phones to film.

After lunging at the man a second time and calling the man in a pink shirt a “queer”, the young man then kicks the man in the testicle and gets taken down.

Somehow the man’s shirt gets off him and he gets escorted out of the airport. 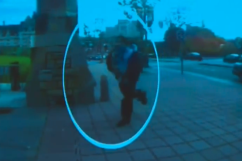 Read More
Airports, Dallas, Police, Youtube
A troubled young man attacks a man in a pink shirt and calls him a "faggot." Then kicks the man in the testicles. Onlookers tackle him and police arrive.