Conor McGregor knocked out Chad Mendes in the second round of the UFC 189 main event to win the interim Featherweight Title.

McGregor was taken down three times by Mendes, but took control in the final seconds of the round and knocked out Mendes with several strikes to the head. The Irish phenom was expected to face champion Jose Aldo for the belt, but Aldo withdrew from the fight with a rib injury.

Watch the knockout above and more highlights below: 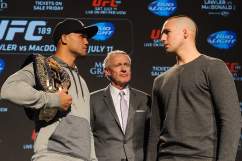