No. 13 Northwestern heads to Ann Arbor to take on No. 18 Michigan in a Saturday afternoon Big Ten showdown. Northwestern is off to a great start and enters the game 5-0. After dropping the road opener to Utah, Michigan has won their last four games to enter the matchup at 4-1.

According to OddsShark, Michigan is favored by 7.5 points. Northwestern is 4-1 this season against the spread while Michigan is 3-2.

The over/under is set at 36 points for the contest. According to OddsShark, both teams have gone under on the point total every game this season.

Overall, Michigan comes away with the conference victory. Expect a low scoring, defensive contest with the Wolverines coming out on top. 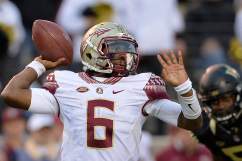