Devin Funchess is developing into a weapon on the outside for the Panthers. (Getty)

The Panthers are in Nashville to take on the Titans, who have had curious success against the NFC South this season. According to OddsShark.com, the Panthers are a 4-point road favorite heading into Sunday.

The Titans may be 2-6, but the record doesn’t tell the full story. The Titans lost two games by a combined three points earlier this season, followed by two weeks withtout an injured Marcus Mariota. That six-game losing streak cost Ken Whisenhunt his job, but the Titans rebounded last week against New Orleans. Marcus Mariota has proven to be a difference-maker under center for Tennessee, and his performance last week could be the reason action is trending towards the Titans.

According to sportsbooks monitored by OddsShark.com, the line for this game opened at six, and has moved down to 4 or 4.5 at many betting sites.

The Panthers haven’t just been winning this season, they’ve been covering. Carolina is 6-2 against the spread this season, including 3-0 away from home.

Carolina has been doing it on defense this season, and leads the NFL with 13 interceptions. The big story will be if Mariota, who has been relatively secure with the ball, can prevent the big turnovers against the Panthers Sunday.

The point total for this game opened at 42, but has since climbed to 44 or higher at sportsbooks monitored by OddsShark.com. The total has gone over in five of Carolina’s last six games, as well as nine of their last eleven road games. The Titans haven’t done a ton of scoring this year, but that changes with Mariota under center. In Mariota’s five starts in which he’s finished the game, the Titans have scored over 30 points three times.

The OddsShark Computer is projecting a 23.8-21.2 Panthers victory, giving the Titans a narrow cover. I also like Tennessee and Mariota, who has a habit of keeping games close into the final quarter. 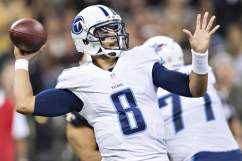 How to Watch Panthers vs. Titans Live Stream Online