Only three weeks remain to get in your daily fantasy football fix for the 2015 regular season. Week 15 should be a particularly intriguing one, as it starts off with two projected defensive battles--Tampa Bay at St. Louis (over/under 40.5) and NY Jets at Dallas (over/under 42)--and closes with two projected shootouts--Arizona at Philadelphia (over/under 50.5) and Detroit at New Orleans (over/under 51). Mixed in between are four more games with an over/under above 46 and only one with an over/under of 42 or less, so overall it should be a high-scoring slate of games. Throw in the run of injuries from last week--Thomas Rawls, Andy Dalton, T.J. Yeldon, Vincent Jackson, Jonathan Stewart, Tyler Eifert, just to name a few--and there will be a ton of value plays for daily fantasy owners to target. With that in mind, click to the right for some of the best DraftKings bargains and sleepers for what figures to be a wild Week 15 in the NFL. (Getty) 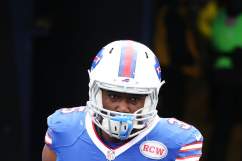 Read More
DraftKings, Fantasy Football, Fantasy Sports, Football, NFL
Looking to find some of the best daily fantasy football sleepers and bargains for Week 15? We've got you covered with value plays at each position.