The NBA will finally announce the MVP, and a bevy of other awards tonight. The awards night starts at 9 p.m. Eastern on TNT. The show will feature Drake as host, paired with the Inside the NBA crew.

Here are the details for the NBA’s inaugural award show.

The NBA decided to hold off on announcing awards like MVP, Rookie of the Year and Coach of the Year until tonight’s award show. Previously the awards were announced shortly after the regular season, but the NBA is taking a page out of the NFL’s playbook by announcing all the awards at a ceremony.

All eyes are on the NBA MVP race as it has been one of the closest races in recent history. Russell Westbrook is the favorite to win the award, but James Harden could also take the trophy.

Joel Embiid, Malcolm Brogdon and Dario Saric are the three finalists for the Rookie of the Year award. Greg Popovich, Erik Spoelstra and Mike D’Antoni are competing for Coach of the Year. The Sixth Man Award will come down to Lou Williams, Eric Gordon and Andre Iguodala.

Kawhi Leonard, Draymond Green and Rudy Gobert will compete for Defensive Player of the Year.

It will be interesting to see how the revamped awards format will do. There is a chance fans have lost interest in the awards now that the season is over. However, some fans could prefer more of a spectacle like tonight’s show. 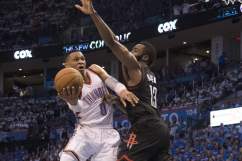 Read More
Basketball, NBA
The 2017 NBA Awards takes place tonight in New York City. Find out all the details about when the award show starts on TNT.