Tapwrit has won the Belmont over Irish War Cry with an official time of 2:30.02. It looked as though Irish War Cry was going to win the race, but Tapwrit caught Irish War Cry on the final turn to pull away at the very end.

Fan favorite Patch, who only has one eye, came in third to give trainer Todd Pletcher first and third in the race.

The 2017 Belmont was anyone’s best guess with two of the favorites scratched from the race. Classic Empire would have been favored, but was scratched the week of the race with a foot abscess. Japanese horse Epicharis was expected to contend in the race but was scratched on race morning.

Irish War Cry entered the race as the slight favorite but was not able to hold on for the victory.

Lookin at Lee was the only horse to compete in all three Triple Crown races and finished seventh. Kentucky Derby winner Always Dreaming and Preakness winner Cloud Computing did not compete in the Belmont. Trainer Chad Brown opted to take Twisted Tom to the Belmont rather than Cloud Computing.

The Belmont is a test of not only speed, but endurance. At 1.5 miles, it is the longest race on the Triple Crown circuit.

Hollywood Handsome did not finish the race. The jockey lost his irons early in the race after several horses appeared to bunch up on the first turn.

Here’s a rundown of the 2017 Belmont results courtesy of NBC.

The following data is courtesy of NBC. It is based on a $2 bet. 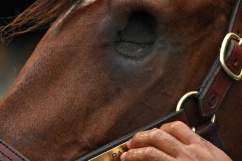