When Apple released the MacBook Pro with Retina display mid last year, it was hailed as the first line of next generation notebooks. This was the bleeding edge at that time and we all thought it would stay like that for some time. Apparently, Google was busy creating what some have described as an even more powerful nemesis to the MacBook Pro and this week, they released the Chromebook Pixel with a big bang.

The Chromebook Pixel is no doubt superior in certain aspects to the MacBook Pro and also falls short in others. Let us take a side-by-side comparison of these two notebooks and see what differentiates or makes them similar.

When it comes to resolutions, the MacBook Pro has always been considered superior no matter what angle you look at it. The 15-inch MacBook Pro with Retina display spots native support of up to 1440 x 900 pixels. This might seem pretty good until you hear what the Chromebook Pixel packs. True to its name, the Chromebook Pixel has a whooping resolution of 2560 x 1700 pixels.

Talking of screens, the Chromebook Pixel beats the MacBook in another aspect; it is a touch-screen laptop. This 12.85-inch multi-touch screen is made of Gorilla Glass and is a capacitive in nature. Starting with the Microsoft Surface and now Chromebook Pixel, we can be sure that it is not going to take long before Apple reinvents the MacBook and comes up with a retina display version that actually supports touch.

Apple integrated the MacBook Pro into the cloud with a software upgrade making it much easier to work and store documents, music and movies online. The Chrome OS on the other hand, which is the operating system for the Chromebook Pixel, is in its entirety, a cloud-based operating system. Everything you do is saved onto the Google cloud. While some would argue that such an OS is still ahead of its time, it nevertheless gives it a superior edge, at least for those who are committed to living in the cloud.

The MacBook, on the other hand, does not need an Internet connection to use, which is the most common way of using computers today. When you talk about performance, Macs have always been the preferred choice, and this time, it’s no different. While the Chromebook Pixel packs a powerful and speedy Intel core i5 processor, the MacBook Pro with Retina display comes with a speedier and turbo boosted Intel core i7 processor. Both machines however pack the same graphics chip, the Intel HD Graphics 4000.

When it comes down it all, the price tag is where the majority of us will draw the line when you decide to make a purchase. Interestingly, Google is not looking to price the Chromebook Pixel  to sell as has been the trend with its previous devices. The Chromebook Pixel is debuting at $1,299 while the lower capacity Mac is at $1, 1999, not much of a price difference.

For serious workers who rely on installed applications that consume a lot of the processing and graphics power, a MacBook Pro with Retina display remains a great choice. For the rest, who are looking to leverage what the Web offers, with a tablet experience, a Chromebook Pixel with its touch-screen is the way to go. 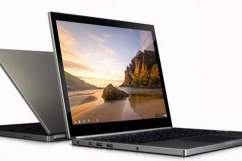