After months of teasing and speculation, Elon Musk has finally revealed his revolutionary concept for the high speed Hyperloop train. The founder of SpaceX, Tesla Motors and Paypal has always had an interest in alternative energies, and this could revolutionize all forms of travel.

1. One Trip Between L.A. And San Francisco Would Take 30 Minutes

Speaking with Business Week, Musk revealed his vision. The train would be able to take passengers up and down the coast in 30 mins. Cars can be carried on into vehicle which would ultimately be a solar-powered elevated transit system. Traveling at 800 mph speeds, the track would be supported by columns stretching 50 to 100 yards apart.

2. The Hyperloop Train Cars Would Be Dense Aluminum Pods

These drawings were part of Musk’s plan showing how the train will carry passengers. (Businessweek)

The train would be comprised of durable aluminum pods that would contain skis with a durable SpaceX alloy called Inconel. The acceleration speeds were a concern but the element encased in this element to handle high pressure and heat. In the designs posted below, Musk elaborates on how the pods will move up and down the track:

Hyperloop consists of a low pressure tube with capsules that are transported at
both low and high speeds throughout the length of the tube. The capsules are
supported on a cushion of air, featuring pressurized air and aerodynamic lift.
The capsules are accelerated via a magnetic linear accelerator affixed at
various stations on the low pressure tube with rotors contained in each capsule.
Passengers may enter and exit Hyperloop at stations located either at the ends
of the tube, or branches along the tube length.

3. Musk Hopes This Is A Low Cost Alternative To Another Politically Motivated Project

A rival bullet train is being produced at 70 billion dollars another train will cost. In the interview with Businessweek, Musk grew “disenchanted” with the plans for this project because its a “horrendous land rights mess.” His plans for the Hyperloop would cost about 6 billion compared to this one. The billionaire wrote a blog post detailing why he feels this development is not worth it. He feels that an investment into a statewide transit system is a good idea but only if it is better alternative compared to flying or driving.

Above you can see Musk’s complaint about the bullet trains.

This picture is an official image from the actual Hyperloop design. Passengers are separated to prevent the brakes from causing a collision. (Mashable)

Of course, the high speed rates probably raised some concerns which is the train will have a durable emergency brake installed. The creator emphasized that pods would be spaced about 5 miles apart with a total of 70 pods leaving every 30 seconds. Factoring more safety concerns, the train’s columns are durable enough to withstand the weather. The trains would remain on the track supported securely.

5. SpaceX and Tesla Motors Comes First: This Is Going To Wait

The exec has made it pretty clear he wants someone else to focus on building it. Concerned he may have announced his ideas way too early, Musk indicated he had a full plate with running his other two companies. SpaceX is busy with developing renewable rockets while Tesla is setting a national network of mobile chargers. The train is a revolutionary concept that would take considerably more effort to make. No one blames Musk for hoping someone else takes charge of the logistics. He’s admitted he will build a prototype however.

6. Other Sources Have Admitted This Is Possible

This invention was described as a bizarre concoction of mismatched features. Despite that, reputable sources have admitted the train is possible. The schematic seen above was created a few weeks ago by “tinker” John Gardi. Sketched out through Microsoft Paint, the design he made was nearly spot on for what Musk discussed today. Musk also provided Gardi with some helpful hints on what the pods would be meaning his vision was accurately represented.

7. The Billionaire Has Been Teasing This For A Few Months

Speculation soared when Musk talked about at AllThingsD’s annual D11 conference. Hinting that it was a “really fun ride”, the Tesla CEO cranked up the rumor mill. The tweet seen above is where the tech community began to get an idea on when we would see the first version of this. Through his twitter profile, he responded to several tweets explaining how he would approach building this prototype.

In 1972, the Rand Corporation attempted a similar project called VHST. Creatively called the “Very High Speed Transit System”, the hope for this train was to travel across country at a possible 14,000 miles an hour. The physicist in charge of this research, R.M. Salter, considered this plan difficult to build but not farfetched. Read the full report above and you’ll see that it contains many aspects of Musk’s final design.

The CEO has the skills, resources and powerful friends to help this plan work out. (Getty)

The answer is yes. While the idea may seem too futuristic, Musk has the creativity to bring this plan to life. From his extensive career in technology and involvement in some of the most influential companies, the entrepreneur has the funds to produce this vehicle. This continues the trend of his desire to reinvent transportation and identify possible areas for expansion. The future just may need to catch up to his vision first.

If Elon decides to focus his resources on its creating, probably sooner than we may think. All of the details he describes are completely plausible but technology needs to catch up a bit first. The actual report he published is embedded below. It’s comprehensive but understandable in regards to the benefits the train will have. We’d love to hear your thoughts on this so leave us some comments below. 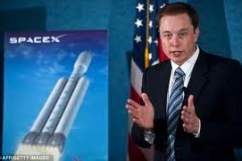