Apple CEO Tim Cook shows off one of the new iPhones to Elvis Costello yesterday. (Getty)

Apple announced the iPhone 5S & iPhone 5C this week, adding two new additions to the smartphone family. The iPhone 5C is intended a cheaper entry level phone while the iPhone 5S is the flagship device for the next series of iPhones. Both offer a dazzling array of new features but which should you buy?

The iPhone 5S is an incredible upgrade over the iPhone 5 in every way. The internal components are a big selling point of the iPhone 5S with its A7 processor. The Apple A7 chip will have a 64-bit processor which is twice as fast as its predecessor. The inclusion of the A7 chip means that graphics and performance in terms of browsing speed and battery life are enhanced as well. The M7 processor is another new component embedded within the iPhone 5S hardware which monitors the iPhone’s gyroscope, compass and more. Some sources believe this going to support the installation of more health apps adding new programs to that particular section of the App Store.

One other significant addition is the TouchID fingerprint scanner housed in the home button. The fingerprint scanner is an extra level of security for the iPhone 5s that harnesses biometric scanners. This new function can allow for instant access to your phone since it would identify your unique scan and unlock the device preventing others from illegally accessing it. TouchID is capable of authorizing iTunes store purchases as well.

For the iPhone 5C, it has a 4-inch retina display with a variety of new polycarbonate designs. Essentially, the build is exactly like the iPhone 5 with the same A6 processor and an 8 megapixel camera. Ultimately, the only distinguishing aspect of this new product line is that it will come in a wider variety of colors.

So which should you buy? The iPhone 5S will be your best bet when it gets released. While the notion of “cheap” iPhone is nice when it comes to the luxurious set of Apple products, the price isn’t much different. The iPhone 5C is sold in two different models at $99 for 16gb and $199 for 32gb but its features are limited compared to the golden iPhone 5s. The iPhone 5s will be sold in three different versions: 16gb will cost $199, 32gb will be priced at $299 rounded out by a 32gb model at $399. Although these numbers are high, the experience associated with the iPhone 5S would be well worth it. 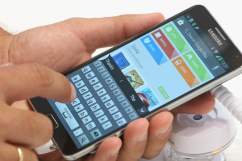 Samsung Galaxy Note 3 vs. iPhone 5S: Which Should You Buy?