The Galaxy Gear smartwatches pictured above are about to get some serious competition. HTC is reportedly working on a Google Now smartwatch. The device is expected to be unveiled by the end of the month. Here’s what we know.

The Next Web writes that HTC will unveil their Google Now smartwatch next week at the Mobile World Congress in Barcelona.

The Next Web predicts that the Google Now watch “will likely have an AMOLED screen, as well as a smart wristband that plays music and comes with activity-tracking features.”

2. The Google Now Smartwatch Could Save HTC

HTC’s Google Now smartwatch could give HTC the sales boost it needs. Bloomberg reports that the “Taiwanese smartphone maker [is] struggling with sliding sales.”

Drawing in fresh blood with a focus on wearables could help HTC to earn more money in the face of soft cell phone sales.

The Bloomberg video above outlines how Google Now competes with Apple’s Siri.

3. HTC Will Also Debut a Music Bangle and Additional Smartwatch

HTC's first smartwatch will be based on Qualcomm's Toq, plus it's working on a Google Now watch http://t.co/oGBiQIMOj1 by @devindra

According to TechCrunch, HTC plans to debut three wearable devices at MWC this year. One of these devices, a “music bangle,” would be a piece of electronic jewelry that plays songs. No word yet on what the capacity of this device might be.

In addition to the Google Now watch, HTC will also promote another smartwatch, reportedly based on the Qualcomm Toq prototype. Slashgear reports “HTC will reportedly be showing the watch off to carriers at the show with no plans to show it to the public at this time.”

Google Now is a personal assistant tool that allows users to quickly search their device for info on minimalist “cards.” Users can get reminders, pull up reservations, search through photos, and even keep your loved ones abreast of any delays in your commute.

Google Now seems to be getting a lot of traction lately. Back in 2012, Google Now was named “Innovation of the Year” by Popular Science. You can see Pop Sci’s reasonings for giving top honors to Google Now in the video above.

5. HTC Will Be the Makers of the Very First Google Now Watch

The Verge reports that there are no Google Now smartwatches currently on the market. Being the first to market such a device could make HTC a trendsetter, assuming it sells well. 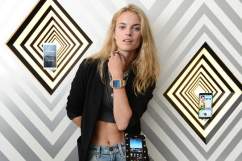