It turns out that Tickle, an app that helps people fake a call to get out of awkward situations, isn’t a real app. Here’s what we know so far about this elaborate video prank, which you can watch above.

Hilarious: Tickle, the app that gets you out of awkward situations. Because stroking your pants isn't awkward at all. http://t.co/IxduGZF4sP

As you can see in the video above, Tickle claimed to be able to help users get out of awkward situations, such as a bad date. To trigger a fake phone call, users could “tickle” the screen of their phone through their pants. This “phantom phone call” then gives users the perfect excuse to leave the room.

Sadly, according to TechCrunch, Tickle is just a video prank, and not a real app you can get for your iPhone.

2. Tickle Was Created by Alex Cornell

I made a new app using my vast technical skills: http://t.co/FEpQXKLKt7

Alex Cornell is the co-founder of Firespotter Labs, a group of app developers. Real apps developed by Firespotter Labs include Nosh (a food review app) and the free conference call tool UberConference.

While Tickle is just a joke video for now, that could all change very soon. Cornell has a history of being involved with fake services that later become real.

Back in 2011, Cornell was one of the minds behind a fake service called Jotly, a service for rating everything and everyone in your life. You can watch the Jotly video above.

The funny thing is, in the wake of this particular parody, Jotly actually became a real thing. The moral here: if enough people liked the idea of Tickle, it won’t be long until it becomes a real app.

4. Alex Cornell Is Not Sorry About Tickle Video

Tickle, an app to get you out of awkward situations, isn’t real but it should be http://t.co/7alFKKakI1

TechCrunch reports that Cornell doesn’t appear to be sorry for fooling folks with his well-made Tickle video.

“I like the idea of exploring weird and new ways of product development. My skill set is design and video; I cannot code,” says Cornell. “I like the idea of throwing an idea out into the world, relatively formed and outfitted for survival on the Internet, and seeing what happens.”

5. The Mainstream Media Got Hoodwinked by Tickle

This app gets you out of awkward social situations by creating a fake phone call. Genius. http://t.co/SaqGQsbjy4

Many mainstream media outlets reported on Tickle as if it were a real app. The Daily Mail, for example, seems to have reported on this app unironically. At the time of this writing, the Daily Mail had not yet issued a corrections statement to their article about the app’s hoax status.

Unfortunately for gullible consumers, 2014 has been a big year for hoaxes that masquerade as real products. Most notably, Funny or Die was behind a video that claimed to showcase “real” hoverboard technology. Consumers will need to practice being skeptical, especially with April Fool’s Day coming up soon. 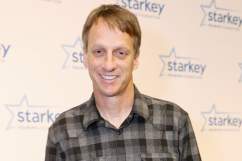