Love to play tower defense iPhone games? We’ve rounded up our Top 5 favorites in the genre.

Available on the App Store, Castle Doombad is one of the best titles Adult Swim has ever put out. That’s saying something, considering the addictive nature of AS’s other games like Monsters Ate My Condo! or Robot Unicorn Attack.

The story is spread across three chapters, totaling 45 levels. What sets Castle Doombad apart from the competition is the sheer number of ways the enemy can attack your fortress. While many tower defense titles feel linear and repetitive, this game is frantic and fast-paced.

Castle Doombad scored a 5-star review on TouchArcade, where reviewer Eric Ford said that Doombad “nails everything I could want in a ‘defense’ title.”

After a while, all tower defense games start to look the same. What makes Jelly Defense so refreshing is its unique visual style. Even though it’s an older title, it still remains one of the best TD games ever released for the iPhone.

The playful use of color, memorable character designs, and engaging gameplay make this TD game a must-play for iPhone fans.

Available on the App Store, geoDefense Swarm is another “oldie-but-a-goodie” TD game for iPhone.

What makes this game so memorable (aside from its stunning graphics) is the fact that your enemies aren’t stuck on a single fixed line of attack. The open map concept that drives this game really ups the difficulty level, making this the perfect title to challenge even the most jaded tower defense fans.

geoDefense Swarm has garnered a ton of accolades, including perfect scores in reviews from Panapticon and GamePro. The only downside is the lack of new levels.

Available on the App Store, Anomaly 2 scored a 5/5 rating on TouchArcade when it launched last year. The entire Anomaly series is great fun, but Anomaly 2 sticks out because of its robust multiplayer and its stunning graphics.

Anomaly 2 offers TD fun for both single players and multiple players. In this game, you must lead a convoy across a post-apocalyptic wasteland to fight against an alien threat. The only downside to this game is that it is very graphically intense, so people with older iPhones may find the game is sluggish on their device. 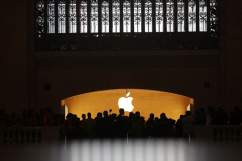