Brad Katsuyama, seen in the video above, believes the stock market is rigged. Here’s everything you need to know about this controversial, polarizing figure from the world of high-frequency trading.

1. Brad Katsuyama Is at the Center of ‘Flash Boys’

"I believe the markets are rigged. And I believe you're a part of it, too." — IEX's Brad Katsuyama to BATS president on @powerlunch @cnbc

Katsuyama is heavily featured in the Michael Lewis bestseller, “Flash Boys,” an excerpt from which has been published on the New York Times Magazine website. You can buy this book here from Amazon.

Katsuyama argues that the practice of high-speed trading creates an unfair advantage for some traders. These trades, conducted in a fraction of a second thanks to an advanced algorithm, are at the center of “Flash Boys.”

Here is an excerpt from the NYT Magazine piece, which explains Katsuyama’s feelings towards high-speed traders:

“Do you think of [high-frequency traders] differently than you did before you opened?” someone asked.

“I hate them a lot less than before we started,” Katsuyama said. “This is not their fault. I think most of them have just rationalized that the market is creating the inefficiencies, and they are just capitalizing on them. Really it’s brilliant what they have done within the bounds of the regulation. They are much less of a villain than I thought. The system has let down the investor.”

Still confused by high-speed trading? This video makes the concept easy to understand, using the plot of a Superman film to break down the trading process.

2. Brad Katsuyama Is the Co-Founder of the IEX Exchange

Brad Katsuyama getting a round of applause and plenty of handshakes from traders on floor of NYSE @cnbc pic.twitter.com/lehFyKH18B

The IEX Exchange is a trading exchange based in the US. It opened in October of 2013, and is dedicated to “fair play” in trading.

Fun fact: According to Wikipedia, “the founders had planned to name the business Investors Exchange, but after typing it into a web browser, realized that this combination of letters also spells Investor Sex Change. Thus they opted to shorten the name to IEX.”

Katsuyama is Canadian, and many in the press have noted how the famed Canadian talent for politeness has influenced his worldview. Katsuyama is known for hiring people who aren’t “jerks.”

The New York Times Magazine article about the men of “Flash Boys” elaborates:

“For his first few years on Wall Street, Katsuyama traded U.S. energy stocks and then tech stocks. Eventually he was promoted to run one of RBC’s equity-trading groups, consisting of 20 or so traders. The RBC trading floor had a no-jerk rule (though the staff had a more colorful term for it): If someone came in the door looking for a job and sounding like a typical Wall Street jerk, he wouldn’t be hired, no matter how much money he said he could make the firm. There was even an expression used to describe the culture: “RBC nice.” Although Katsuyama found the expression embarrassingly Canadian, he, too, was RBC nice. The best way to manage people, he thought, was to persuade them that you were good for their careers. He further believed that the only way to get people to believe that you were good for their careers was actually to be good for their careers.”

As a way of leveling the playing field against high-frequency traders, Katusyama and his colleagues basically created a financial “speed bump.” CBC News explains Katsuyama’s contribution in clear, concise language:

Katsuyama told Lewis that he had uncovered the methods high frequency traders use to get what he considers to be an unfair advantage over other investors.

Katsuyama noticed that when he would send a large stock order to the market, it would only be partially filled, and then he would have to pay a higher price for the rest of the order.

When he investigated, he found that his orders travelled along fibre-optic lines and hit the closest exchange first, where high frequency traders would use their speed advantage to buy the shares he wanted and then sell them to him at a slightly higher price – all in milliseconds.

Katsuyama and an RBC colleague then created a system that would effectively nullify the advantage of the high frequency traders by creating what amounts to a financial speed bump.”

Attorney General Eric Holder, pictured above, is one of the officials investigating high-speed trading.

The FBI and the Justice Department are investigating the practice of high-frequency trading. According to TIME, other officials looking into the legality of the practice include New York Attorney General Eric Schneiderman, the Commodity Futures Trading Commission, and the Securities and Exchange Commission.

“For the Justice Department to find [high-speed trading] illegal, it would have to establish that the traders are buying or selling a security while in possession of nonpublic information about the product.” 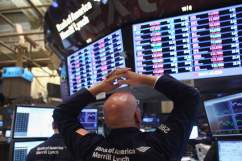