April 2014 is a great month for astronomy fans. There is a total lunar eclipse on the 15th, a solar eclipse on the 29th, and a meteor shower from the 22nd to the 23rd. If you want to brush up on your astronomy knowledge this month or in the months to come, these are the best apps for the job.

In the video above from NASA’s Ames Research Center, NASA’s Jerry Colen outlines the NASA App for iPad.

When it comes to celestial news and events, NASA is the most respected name out there. The NASA App is a great resource for space exploration news, Twitter notifications about upcoming astronomical events, and ISS and Earth orbiting satellite trackers.

The NASA App is ideal for fans of space exploration, people who love space photography, or people who want all of NASA’s various Twitter accounts viewable in a single, easy-to-view app.

The Applinga video above outlines the features of the Star Chart app.

Star Chart is used by over 10 million people, making it one of the most popular astronomy apps on mobile. Star Chart is an augmented reality app: When you point your device at the sky, the app tells you exactly what constellations or phenomena you are observing. This AR feature has a cool added feature: When you point the device at the ground, you’ll see what people on the other side of the planet are seeing when they look at the night sky.

Star Chart is an exceptional app because of its gorgeous UI, robust celestial database, and cool “Time Shift” feature that lets you see what the night sky will look like in the distant future. With info on some 120,000 stars, this app is a must-own for casual astronomy fans.

Check out the official tutorial from the developers of Star Walk in the video above.

Star Walk stands out from the crowd because you can easily use it in conjunction with a telescope. Star Walk’s got TelRad, which will help you find the exact position of an object when stargazing with a telescope. The interface not only identifies objects, but helps to educate users with a bit of history about those objects.

It also has AR and “time machine” capabilities, like Star Chart. Additionally, the Picture of the Day feature ensures that you’re always learning something new about the world of astronomy.

The video above outlines SkySafari for Android.

SkySafari is a notable astronomy app that has racked up tons of awards over the years. That being said, it does have a few limitations. Unlike the other apps on this list that ofter “time hop” features for thousands of years, SkySafari only lets you go 100 years in the future or the past.

However, SkySafari remains a smart buy because it works offline and has a good emphasis on the mythology behind constellation names. The app also gets you a subscription to SkyWeek. This magazine alerts you regarding upcoming eclipses and meteor showers, like the ones we are expecting in April 2014.

Check out the App Finder’s review of Distant Suns in the video above.

Boasting the coolest name of any app on this list, Distant Suns is an astronomy app with a focus on SETI’s search for life on planets surrounding far-flung suns. Distant Suns actually started life as a desktop software application way back in 1987, which is pretty cool.

What makes Distant Suns so useful is the app’s smart features. In addition to a “red mode” to preserve your night vision, there’s also Viewpoint Lock, which keeps any planet centered. It’s also a great app for Pluto fans, as you can opt-in to have Pluto included with the 8 “true” planets in our solar system. 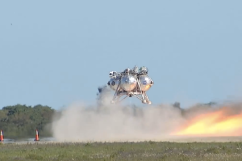