Knee Defender device sparks row as airline seats shrink comfortA device known as the "Knee Defender" was at the center of a dispute on a United Airlines flight over the weekend. The product is attached to the back of an airline seat, preventing the person in front of you from reclining. As seats on flights continue to shrink, the battle for space in the…2014-08-27T00:03:01Z

The Knee Defender is a controversial device used by passengers on airplanes. According to WJLA, this little device caused a huge fight on a United Airlines flight earlier this week.

Should you buy one now, or are the Knee Defenders on the fast track to get banned? Check out the video report above, or read on to learn more about why this simple device has made so many people angry.

Knee Defender- Quick "How To" | EpicReviewGuysHere is a quick demonstration of how to place the Knee Defender to block the seat in front of you from reclining. Don't miss the next info-packed video- Subscribe Now-youtube.com/subscription_center?add_user=EpicReviewGuys Into Looming? Check out our Rainbow Loom vs FunLoom video: youtu.be/KC7t6NIlj_U2014-08-26T17:13:59Z

Learn how to use this simple device in the video above.

The Knee Defender consists of two plastic clips that are roughly the size of a house key. You place the clips in the seatback in front of you on an airplane, against the tray table arms. This prevents the person in front of you from reclining, which gives you more leg room and additional room for working on your laptop in flight.

2. Knee Defender Caused a Fight on a United Flight

The Knee Defender is in the news this week because it was the cause of a fight between two passengers on a United Airlines flight. Business Insider reports that two passengers on United Flight 1462 got into a fight over the use of the device during the flight. The flight had to be diverted from its original Newark to Denver trajectory, stopping in Chicago because of the altercation.

The passengers have not been named. According to WJLA, the FAA is authorized to impose a civil fine of up to $25,000 for passengers who are unruly during a flight. In this case, however, no arrest was made.

3. Knee Defender Hasn’t Been Banned by the FAA

The Knee Defender has not been banned by the FAA. However, the FAA does allow each individual airline to set their own policies regarding the device. USA Today notes that most major airlines have banned the use of the Knee Defender, or any device that limits the seat’s ability to recline.

Check out the report above about this passive-aggressive air travel accessory from BBC Radio’s Travel Psychologist.

ABC notes that the man who invented the Knee Defender had a good reason for doing so. Ira Goldman invented the device in order to give himself more room on flights. Ira Goldman’s height has been various reported in the media as 6’3″ or 6’4″, with ABC citing the latter figure as his true height. ABC adds that Goldman has agreed to remove his product from the market if it can be proved that it is unsafe. So far, Goldman hasn’t found any compelling arguments that the Knee Defender poses a danger. 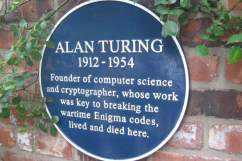 Alan Turing: The Photos You Need to See

5. Some People Are Defending the Knee Defender

The Knee-Defender – useful against the oblivious/reckless that aggressively recline their seats (most) in-flight. I'll choose the exit row.

In an opinion piece for TIME, Bill Saporito extolls the virtues of the Knee Defender, despite complaints from people who say the devices are inherently unfriendly:

“Yes, it’s not the most civil behavior, but United and other airlines brought this about by treating us like cargo. Consider the situation on Flight 1462. United runs 737s, among the smallest in the Boeing fleet, out of Newark to distant places. It’s four hours to Denver from Newark. The coach seats are 17.3 inches wide. The pitch is 31 inches in Economy and 34 inches in the so-called Economy Plus, where the dueling pair was sitting. Economy Plus used to be called by another name, Economy, until the carriers started adding rows and squeezing the space. This fight started because the guy was trying to work on his laptop. You can’t use a laptop when the seat in front of you is in your lap.”

Read More
5 Fast Facts, Airplanes, Airports, News, Technology
What the heck is a Knee Defender, and why did it cause a fight to break out in mid-air during a United flight?